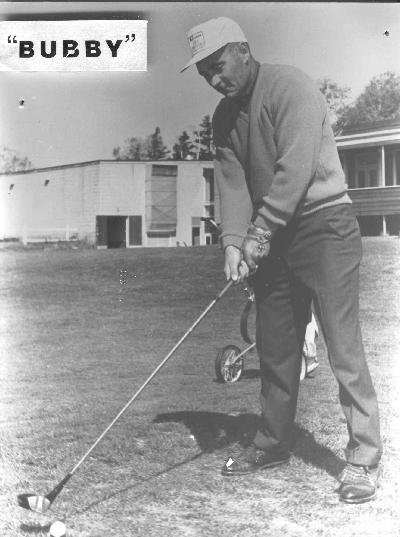 Cecil Dowling, affectionately known by many Islanders as “Bubby”, was probably the finest golfer ever to come out of the Maritimes. Born on April 10th, 1928 in Charlottetown, Cecil first attainted prominence in another sport suited to his fine eye. In 1945, at age 16, Cecil played on a great junior line, made up of himself, Allie Carver and Wallie Shepherd, with a Charlottetown Legion hockey team. After two years of junior hockey in Cape Breton, and some senior hockey on the Mainland, Cecil played with the Charlottetown Islanders from 1952 to 1955, when the Maritime Big Four Hockey League was comparable to the American Hockey League.

In this new league, Cecil won the Maritime Professional Open on five occasions, including a record three consecutive times. He won both the Moncton Open and the Saint John Open twice, and once captured the Nova Scotia Open. In 1958, he accomplished a remarkable feat when he won all five “open” tournaments in the Maritime Provinces: Saint John, Moncton, Prince Edward Island, Nova Scotia and Maritime PGA.  Also in 1958 Cecil Dowling won the Bols tournament at Belvedere in Charlottetown with a course record that will stand forever, a nine under par 63. The course layout at Belvedere has since changed.

In national competition, “Bubby” played in the Labatt Open in Montreal, the equivalent of today’s Canadian Open. He scored 74 and 71 to make the half way cut and qualified for all four rounds.  In 1959 at the Canadian PGA in Hull, Quebec, he fired a blistering 68 in the first round to trail leader Stan Leonard by one stroke.  He finished the 54 hole tournament two strokes out of second place.

As a professional at Belvedere Golf and Winter Club in Charlottetown, Cecil “Bubby” Dowling was a steadying influence on the young golfers of that area for many years, and his enthusiastic guidance has contributed to the healthy upswing of golf in the Province of Prince Edward Island as a whole.  In recognition of his positive presence in the sport, he was inducted to the P.E.I. Sports Hall of Fame in 1974.

Cecil passed away in Charlottetown on August 3, 1999.