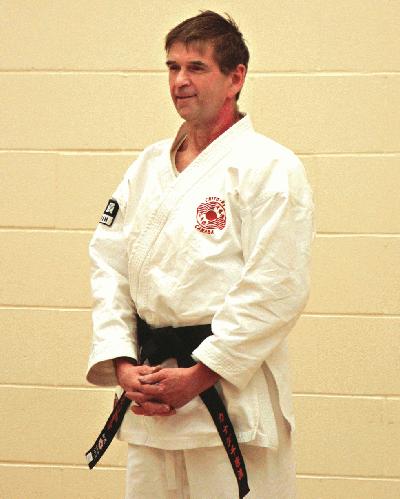 Armand Martin, from the community of St. Peter and St. Paul near Tignish, will become the first from the sport of karate to be inducted into the PEI Sports Hall of Fame this Friday, when the annual ceremony is held at the Silver Fox in Summerside.

Joining Martin will be Don McDougall (builder, baseball). Clair Sudsbury (builder, hockey) and the Summerside Crystal Sisters hockey team. Very few tickets remain for the induction, and they can only be purchased by contacting Nick Murray at Sport PEI at 368-4547.

One of West Prince’s most notable citizens, Armand Martin defines the community volunteer that plays such an important role in defining membership of the PEI Sports Hall of Fame.

An exponent of the Chito Ryu form of karate, Armand’s teaching and influence has benefitted literally thousands in his community who have attended his classes in Summerside, Westisle and Tignish, where he has even established his own dojo behind his home.

A 5th dan black belt – one of the highest attainable – Martin is revered throughout Canada as a true exponent of the art, and he has helped almost 40 students attain their own black belt status in his 30-plus years of teaching. He is an outstanding coach, and has also officiated at numerous regional and national championships.

Patient and humble, there is a real connection between Sensei Martin and his students. He has been named a Coach of the Year on many occasions by the provincial body, and his community work has seen him recognized with the Heart of Gold Award, and the Citizen of the Year Award, by the community of Tignish.

The announcement of Armand Martin’s induction into the PEI Sports Hall of Fame in the Class of 2012 has already been greeted enthusiastically by both his community and exponents of his sport, and a good crowd will be on hand to witness this outstanding individual’s induction into the shrine of provincial Island sport.