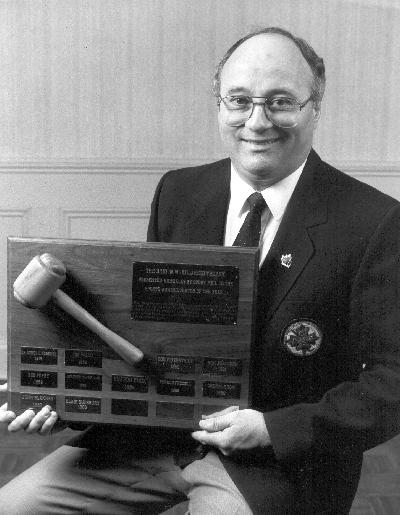 Clair Sudsbury has given his leadership talents to many community and national organizations for many years, but it is in sport, most notably hockey, where he has made the most significant contributions.

Beginning in 1970 as a treasurer and secretary for the Island Junior A League, Sudsbury became President of the PEI Hockey Association for five years between 1976-1981, before moving on to the national body, where he served first as Chairman of Finance, and then to Vice-Chair in 1985.

During his tenure as financial chair, Sudsbury helped turn around the finances of the organization, and it was only fitting that he would become the first PEI chair of the Canadian Amateur Hockey Association when it held its Annual General Meeting in Charlottetown in 1987.

Serving as chair for two years, Clair was also a member of the Canadian International Hockey Committee with responsibilities to the international and Olympic teams, and he was the Canadian representative at both the 1988 Calgary Olympics, and the IIHF event held in Spain that same year.

For his contributions to the game Clair was named the Sport PEI Administrator of the Year in both 1977 and 1988, as well as the CAHA Volunteer of the Year in 1990, but arguably his proudest moment came in his home town, when he became President and General Manager of the Hemphill Pontiac Western Capitals, forging the team that won the Canadian Junior A Championship, the Royal Bank Cup, on home ice in 1997.

Many other groups have benefitted from Clair’s involvement, most notably the PEI Sports Hall of Fame, where he served with distinction as chair from 1996-2009. In recent years Clair has been recognized by both Hockey Canada and the PEI Hockey Association with Life Memberships, fitting reward for a man who has served to better the game at all levels for many years.