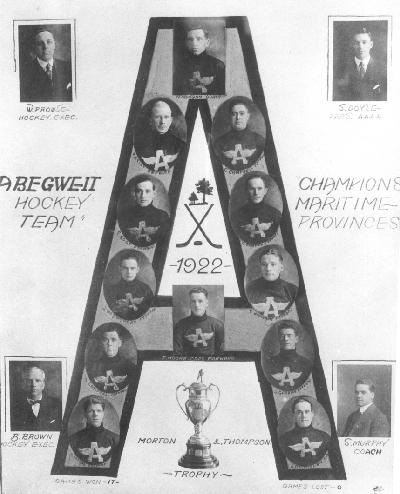 The 1921-22-23 Charlottetown Abegweit Hockey Club, this team has generally been acclaimed as the greatest amateur hockey squad ever to come out of the Maritime provinces.  This fourteen member team won two Maritime Championships, and in so doing compiled a record of thirty wins, one tie and one loss, in a performance that probably never will be equalled.

Judged as their greatest achievement was a game against the famed Toronto “Granites,” the team that represented this country at the World Olympics in 1923 and went on to win the World Hockey Championship.

The game was played at the Old Forum in St. John, New Brunswick on January 10, 1923.  The Granites were on their way overseas to compete in the Olympics and were looking for exhibition games along the way.  This Toronto club had been practicing for several weeks on artificial ice in Ontario, while the “Abbies” had only two or three practices on outdoor ponds.  The Toronto Granites won the game 3 to 1, but the Abbie team was very impressive in defeat and received many plaudits for their effort.

The Granites later formed the Montreal Maroons, and in 1925, they won the National Hockey League Championship.  The hockey world soon recognized, if they hadn’t already, that the Charlottetown Abegweit hockey club was truly a great one.

This great team of yester year was recognized when they were inducted into the Prince Edward Island Sports Hall of Fame in 1973.

File Contains: 2 hockey programs 1924, list of plaques to be pres