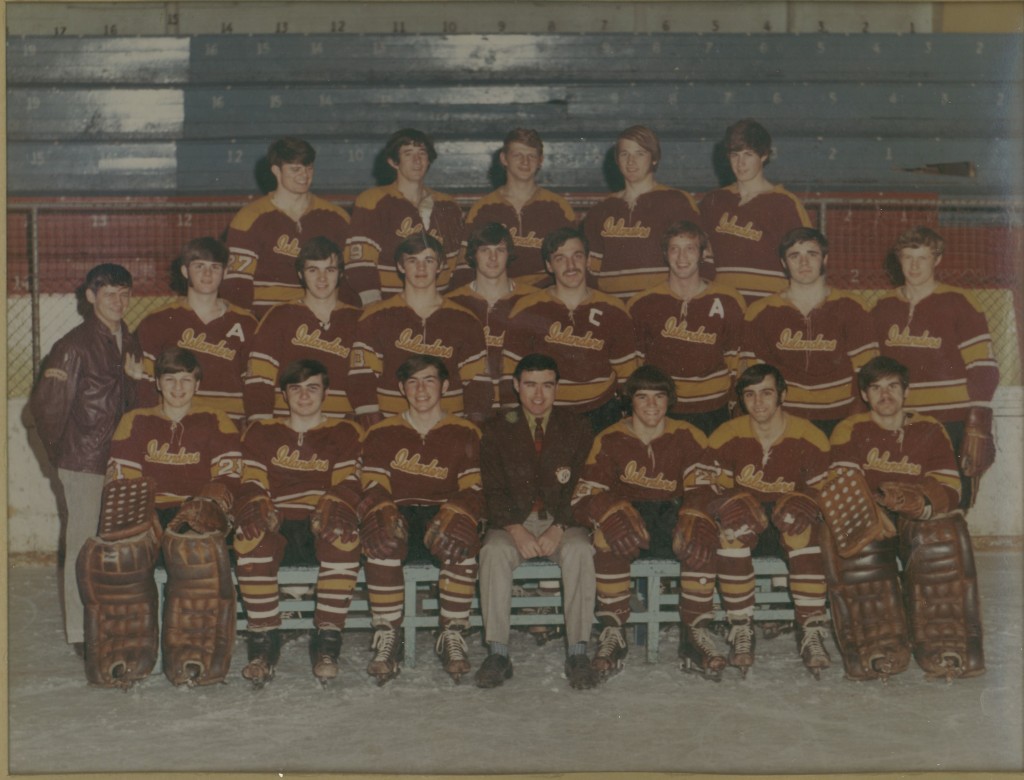 Not since the Charlottetown Junior Royals of 1939-40 has an Island Junior Hockey Club captured the imagination of Island fans as the 1970-71 Junior Islanders had.  This team compiled a record of 48 wins, 7 ties and 17 losses while advancing further in Canadian Junior Hockey playoffs than any previous hockey team in Maritime history.

With the dynamic leadership of coach Jack Hynes, the 1970-71 Islanders surprised a great many hockey experts in our nation by making it to the Centennial Cup, Tier 2, National Championship Finals, losing to the Red Deer Rustlers 4 games to 2.

It was a long hard trail to Centennial Cup Finals. They won the Maritime Junior “A” Hockey League Championship with a record of 26 wins, 5 ties and 9 losses, taking the Halifax Junior Canadians 5 games to 2 in the finals.  Next, they took the Maritime Junior “A” Championship, defeating Moncton Beavers in 4 straight games.  They won the title of Eastern Canadian Champions along with the Hewitt-Dudley Trophy by defeating the Thunder Bay Marrs 4 games to 2 in the semi-finals, and the Detroit Red Wings, also by 4 games to 2, in the finals.

In addition to this outstanding league and championship play, the Charlottetown team also fared well in exhibition games. They played to a 4-4 tie with the O.H.A.’s Hamilton Red Wings.  They also split a two-game series with the O.H.A. Champions of 1970-71, St. Catherines Black Hawks, winning 8-4, losing 7-3.  They gained a win and a tie with the Ottawa A & M Rangers of the Central Junior “A” Hockey League, 3-0 and 3-3. And, finally, they defeated the Moncton Beavers, New Brunswick Junior Hockey League Champions 11-3.

With their many important playoff games in various hockey centers, the Junior Islanders drew the watchful eye of many professional hockey scouts, and as a result, eight players from the team went to the professional ranks: Alan MacAdam, Angus Beck, Kevin Devine, Bob MacGuigan, Alex Dampier, Tom Steeves, Tim Steeves and Peter Williams. Eight others played intercollegiate hockey, and nine of the team members continued their schooling to become university graduates.

It’s not hard to imagine the tremendous pressure that must have been felt by everyone associated with the team in the great 1970-71 season – from players and coaches to managers and executive – when you consider that the team was involved in 29 playoff games before the season came to an end for them against Red Deer.  Despite their loss, all Prince Edward Islanders were extremely proud of their accomplishments, and recognized the ambassadorial work that those youngsters of 1970-71 did for our province as they traveled to various Canadian cities and to the United States.