The P.E.I. Islanders became the first team from the province to win a medal at the national level in baseball, winning silver in 1977.

They featured some of the best players ever to compete from P.E.I. and put together a tremendous stretch drive to reach the national finals.

Following a very competitive performance at the 1975 senior nationals in Vancouver, the Charlottetown Islanders decided, as a team, under coaches Don LeClair and Gerard Smith, to re-group for a run at representing P.E.I. at the 1977 nationals in the Brandon, Man.

The Islanders finished 19-17 in the Nova Scotia Senior Baseball League. They struggled at the first of the season, but won 12 of their final 13 games to force a one-game playoff to decide the final playoff spot. They lost that game to the St. Peter’s, Nova Scotia, Royals.

The Islanders then defeated Morell in three straight games to qualify as the provincial representatives at the nationals in August.

The round-robin at the nationals saw P.E.I. beat Ontario 8-7 with the winning run crossing the plate in the ninth inning. The upset victory set the tone for the rest of the tourney.

Host Brandon dropped P.E.I. 13-3 but the Islanders rebounded for an 8-2 win over New Brunswick followed by a 2-1 edging of Alberta and outlasting Newfoundland 14-12.

The Islanders got some payback by defeating Brandon 9-6 in the semifinal, using a five-run ninth inning in a 12-hit attack against their Manitoba opponents. The host team had gone 5-0 in Division B and finished a game ahead of the Islanders, who were 4-1 in the preliminary round.

The Islanders simply ran out of pitching and lost to a strong British Columbia team in the gold medal game.

Defensively infielder Bill Schurman made 22 assists to lead all fielders.

On the mound, Errol Flynn went 2-0 with a 1.28 earned-run average in seven innings. Bill Weatherbie, Don Schurman and Kelly all pitched a win. Weatherbie also has 11 strikeouts in 12 innings pitched.

Joe Puiia, who was another pitcher on the Islanders, says they faced an uphill battle in the final game.

“We were running on fumes, out of gas by the final game,” explained Puiia. “Our pitching had been stretched to the max and although we got off to a good start, B.C. eventually ran away with the game.”

Smith was pleased. His team played in more than 45 games to reach the national final.

The Islanders were inducted into the Legends’ Field Honour Roll at Queen Elizabeth Park in Summerside in 2015. 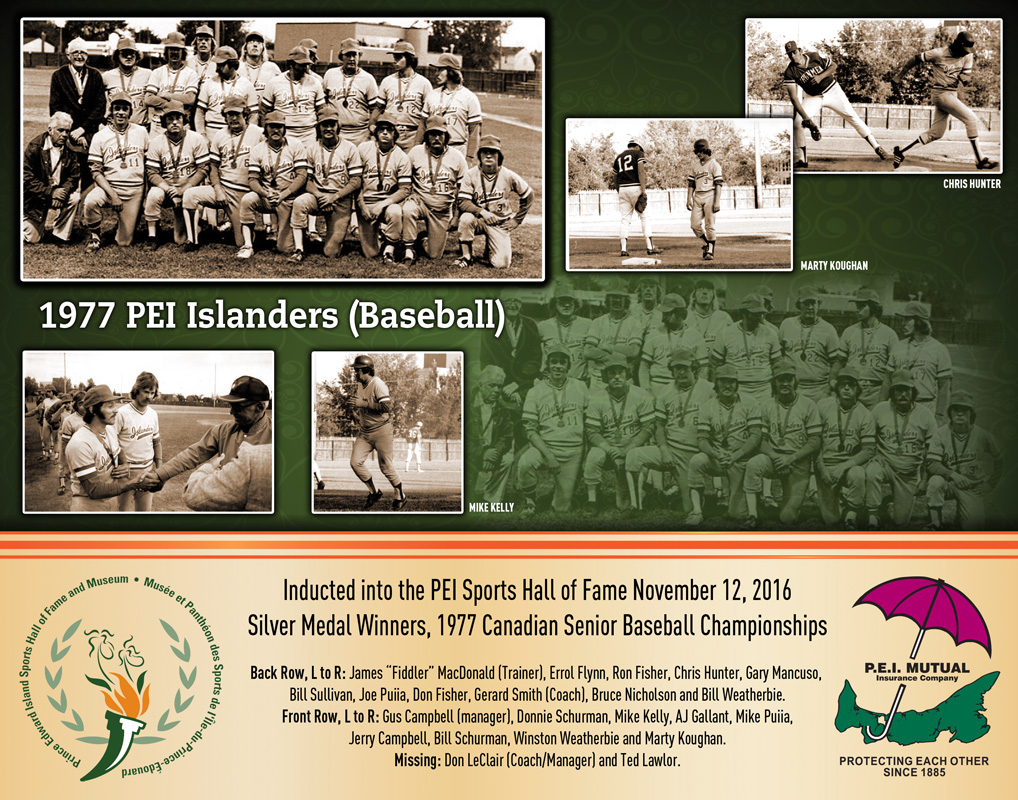