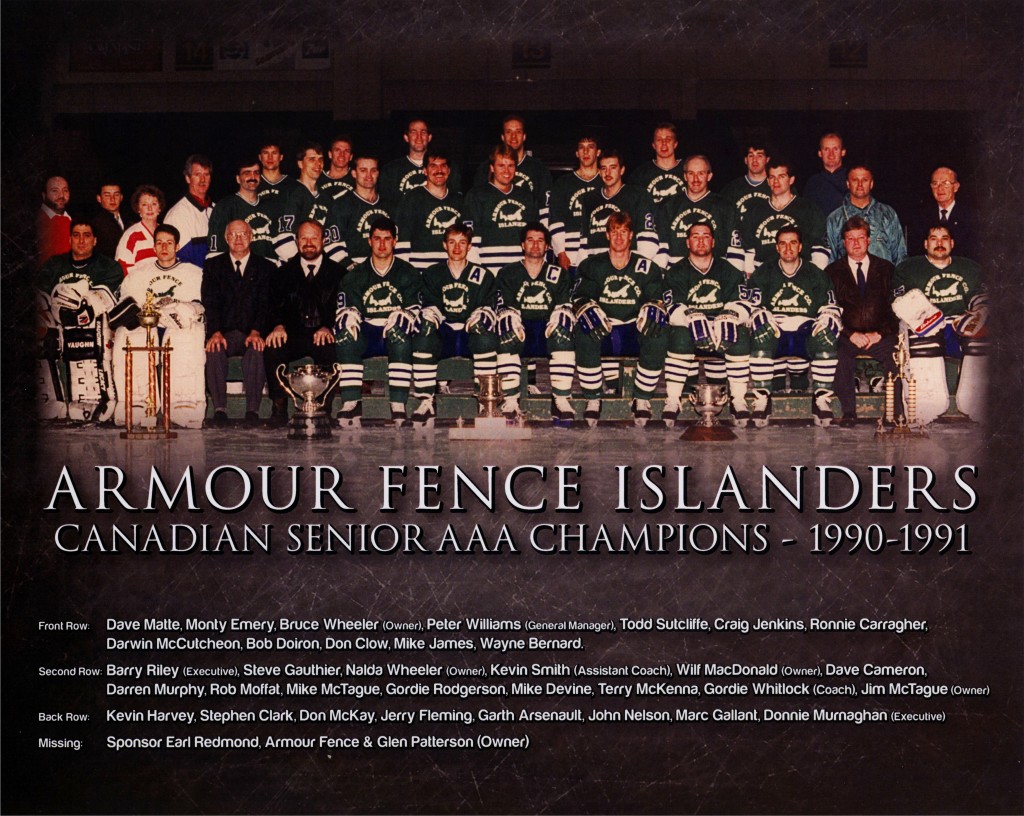 Just saying the phrase: “Allan Cup winners – Canadian senior AAA hockey champions,” should be enough to qualify the Charlottetown (Armour Fence) Islanders of 1990-91 for entry in the Prince Edward Island Sports Hall of Fame. It’s a huge surprise the team hadn’t entered the hall earlier. Now, almost a quarter of a century after performing that historic feat – the only Allan Cup championship for P.E.I. – they are getting their long overdue recognition. And not since the 1935 Halifax Wolverines had a Maritime team won the Allan Cup – 56 years earlier.

There were many superlatives directed the Islanders way during those eventful playoff months of February, March and April – just a few short weeks after P.E.I. hosted the 1991 Canada Winter Games.

They included “There will never be another team like them,” and “The best team ever on P.E.I.” And those accolades were as true then as they are today.

Each player has a wonderful, successful individual hockey story to tell but ultimately hockey is a team sport and this recognition must go to the team as a whole.

The team included several players – including Wilf MacDonald, Don MacKay and captain Ron Carragher who were on the rosters of the Intermediate ‘A’ Charlottetown Islanders teams which won two national Hardy Cup titles over the previous 10 years – 1981 in Winnipeg and 1984 at the Charlottetown Forum. Those were the first national hockey titles for this province and the team richly deserved entry into the sports hall on Sept. 27, 2013.

Now it is the turn of the 1991 Allan Cup champions. A well-known and still active person in hockey who was on the roster that historic year was former NHL player Dave Cameron, now the head coach of the Ottawa Senators. He is just a one example of the talent on that team in 1990-91.

The Islanders started their 1990-91 season with one goal in mind – to win the first ever Allan Cup title for P.E.I. The Atlantic senior hockey champions were to host the Eastern Canadian and national finals that season and the chance to win an Allan Cup on home ice was extra incentive. General manager Peter Williams – a stalwart defenceman with those two Hardy Cup champions and junior Islanders – and assistant GM Mike James, assembled a powerful collection of former junior, university and professional players for that playoff run. Coach Gordie Whitlock, who joined the team in November of 1990, and assistant Kevin Smith guided the Isles to unparalleled success.

The strength of any team starts behind the scenes where club owners Bruce and Nalda Wheeler, Wilf MacDonald, Jim McTague and Glenn Patterson did loads of spadework in raising money and supporting the coaches and players. Others on the executive included Don Murnaghan who was in charge of publicity and Barry Riley. Earle Redmond, who owned Armour Fence Ltd., was team sponsor and Steve Gauthier was the trainer.

As an aside, Nalda played a key role in attracting Don Cherry to a fund raising banquet in January 1992 which attracted 1,000 people to the CP Hotel and funds raised went a long way to paying off bills accrued during the historic Allan Cup run and for that next senior hockey league season.

The future Allan Cup champions really started to play well midway through that historic season and defeated the Saint John Vitos in a bitterly-contested final to win the N.B. Senior ‘AAA’ Hockey League championship in March. The Islanders battled back from a 3-2 series deficit with Charlottetown prevailing in Game 7 in Saint John – a league final which saw Isles’ John Nelson named playoff MVP.

That victory qualified the Islanders to advance against the Bob Boucher-coached Dartmouth Moosehead Mounties for the Atlantic Senior AAA championship. It turned out to be another tough step on the road to the Allan Cup.

After trailing three games to two in the series leaving Dartmouth, the Islanders rallied on home ice to win the Atlantic title in seven games. Gerry Fleming sparked a 4-2 win Saturday, April 6, to tie the series 3-3 and then on Sunday, April 7, Ron Carragher netted the hat-trick as the Isles won 4-1 to clinch the series, earning the Col. J. Bourque trophy, emblematic of the Atlantic Senior AAA Hockey Championship.

In the Eastern Canadian Allan Cup final against Laval Lunasso, a team that included eight players from the Montreal Chomedy club which won the 1990 Allan Cup, all games were scheduled for the Charlottetown Civic Centre. Laval was the Quebec-Ontario champion that year.

After winning 6-3 in the series opener, the Islanders dropped a 3-2 double overtime loss, before winning the next three to win the series 4-1. The series highlight was Kevin Harvey’s winner in the second overtime to give the Islanders a 4-3 win in game four before the 6-2 series clincher on April 17.

That qualified the Islanders to host the national championship against Thunder Bay Twins which had eliminated Paul Band, Alta. in the Western Canadian final. The Islanders were anxious to avenge a four-game sweep at the hands of host Thunder Bay three years earlier in the Allan Cup final. Thunder Bay already had five Allan Cup titles to their credit since 1975.

The national championship opened Saturday, April 27 at the Civic Centre with a 5-3 Isles win, sparked by Cameron’s two goals and assist. The next night, John Nelson potted a pair as the Isles won 5-2. The Isles took a stranglehold 3-0 series lead with a 5-4 win Monday night.

Thunder Bay scored with 1:01 left in the third period in game four on Isles’ goalie Dave Matte to tie the game 4-4 to force overtime. (Matte had joined the team through the season, and together with Wayne Bernard and Monte Emery, provided stellar goaltending throughout the regular season and playoff run). Then early in OT, John Nelson took feeds from Mike Devine and Ron Carragher for a breakaway goal 57 seconds into overtime to win the series in four straight and claim the national title.

Players took turns carrying the Allan Cup trophy around the Civic Centre ice to the thunderous delight of 3,164 fans in attendance. Games in the final series attracted big crowds, averaging over 3,000 in the arena which at that time could seat a capacity 3,200.

Craig Jenkins had two goals in the deciding game, and Dave Cameron was named series MVP. Interestingly, Cameron had coached the Summerside Western Capitals which lost on home ice to a Thunder Bay team a season earlier in the Centennial Cup Junior A final.

The province and city of Charlottetown showed their appreciation with a public ceremony on the steps of the Confederation Centre that week, and then staged a gala banquet at the CP Hotel for the players, coaches, executive, sponsors and fans where Mayor Jack (Spy) Ready – himself a standout defenceman, coach and referee – acted as official host.

In his remarks at that banquet, Coach Whitlock said, “the blending of many individual talents was the key to our success.” He cited talents such as experience, confidence, discipline, character, special teams and role players as key factors.

Wilf MacDonald said the 1991 Islanders might not have been the most talented team he ever played on, but it was the best team he ever played with, “and best always wins.” Wilf also captained the Hardy Cup champions of 1981 and 1984 and enjoyed a successful pro career so he knows what he is talking about.

Coach Whitlock said winning the national senior amateur title was the brightest spot in a coaching career filled with championships. “We had an exceptionally good hockey team. Everyone knew their role, and it was easy for us to play any type of game. We had a lot of laughs. We played hard on the ice, but we all got along well off it, too. You had to really love it to do it.”

Before concluding I want to recognize Gary Devine, a key member of the committee established to get the Isles inducted, and who contacted me to write a letter in support of their induction; and Alf Blanchard, who covered a number of away playoff games for The Guardian, and who also wrote a letter in support of the team. And Evening Patriot sports editor Garth Hurley who covered many of the home playoff games that season.

It was inevitable that a number of players decided to hang up their skates after that 1990-91 season, going out as national champions and bringing a fitting end to phenomenally successful careers.

But together, they made history in that magical 1990-91 season, and brought the elusive Holy Grail of Canadian amateur hockey to P.E.I. for the first and only time.

The Charlottetown Armour Fence Islanders are indeed worthy members for induction into the P.E.I. Sports Hall of Fame.