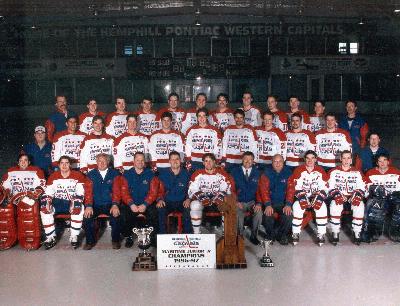 In 1996/97 the Hemphill Pontiac Western Capitals became the first Island team to capture a National Junior “A” Hockey Championship.

Hockey fans in Summerside  were anxiously awaiting the arrival of the1996/97 season when they would have the opportunity to witness the Royal Bank Cup being hosted at historic Cahill Stadium.  Local supporters hoped that the host Capitals would be competitive as they challenged for the National Tier Two Hockey Championship.

Early in the season the Capitals struggled to a record of two wins and four losses in their first six games. Media reports were highly critical suggesting that the Caps would not be a competitive host for the National Championships

By mid-October the Capitals fortunes had changed. They were rapidly moving up the standings in the Maritime Junior “A” League. With winning streaks of 12 games and 13 games they Caps would move to first place in their division by the end of January. They finished the season tied with Dartmouth for first place with a record of 35 wins 14 losses and 7 ties.

In their first playoff round the Caps easily defeated the Restigouche River Rats in five games. During the second round they would face their arch rivals, the Charlottetown Abbies. After winning the opening game 4-3, the Caps lost the next three games and faced the threat of elimination. The Capitals defied the odds and silenced the critics by winning the next three games to eliminate the Abbies. This series would bring out the best in Island rivalry with huge fan participation.

The Capitals would then challenge Dartmouth for the Callaghan Cup, the trophy emblematic of Maritime Junior Hockey supremacy. The Caps claimed the title by winning another seven game series.  After 13 games in 16 nights the Capitals were Maritime Champions.

The next step for the Western Capitals was the Fred Page Cup, the Eastern Canadian Junior “A” Hockey Championship. However, the Maritime series’ had taken their toll on the team. The fatigued Capitals would lose each of their three games.

When the Royal Bank tournament began the Capitals struggled through the round robin with a 1 and 3 record, but managed a berth in the semi-final. In that semi-final game the Capitals  found renewed energy and would manage a huge upset, defeating the heavily favoured Weyburn Red Wings in double overtime. On May 11th the Caps faced the South Surrey Eagles in the Championship game before more than 2000 fans. The Capitals and their fans would not be disappointed as they claimed the National Title with a 4-3 victory.

The Western Capitals success can be attributed to their ability to work as a team. The contribution of management, coaches, trainers, and players were all critical to the success of the National Champions.

For their outstanding accomplishments in hockey the PEI Sports Hall of Fame and Museum is pleased to induct the 1996/97 Western Capitals.

File Contains: Team photo; clippings and photocopies; the story of the season