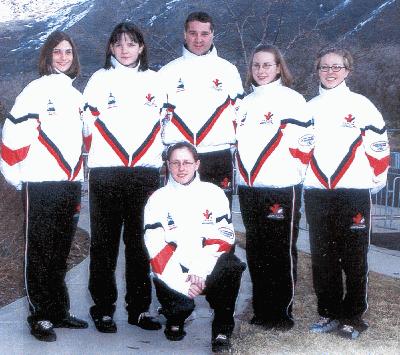 The Prince Edward Island Sports Hall Of Fame is the home of national champions, Olympians, and athletes who have represented their country in whatever their chosen sport may be. It is with great pride that I have been asked tonight to read the induction citation for a team that can proudly call themselves the ultimate in sport – WORLD CHAMPION.

The fact that we are in their home this evening makes this induction extra special. It is within these walls that Suzanne Gaudet, Kelly Higgins, Robyn MacPhee, Stefanie Richard, coach Paul Power, and alternate Carol Webb spent endless hours perfecting their game, practising and honing their skills, and cementing that crucial x-factor – team spirit – that would take them all the way to the top of the curling world. When you leave tonight, look at the walls outside this hall and you will see the pictures and mementos of their victories; check the front door, and the sign that welcomes you – The Silver Fox Curling and Yacht Club; Home of the 2001 Women’s World Junior Curling Champions. Justifiably, they are proud of the girls around here. Their success is shared by all who enter this famous old building.

Success of course does not happen overnight, and it was a long hard road before the ultimate prize was achieved. Suzanne and Stefanie – both graduates of the junior programs at the Silver Fox, tasted success in 1995 when they were part of Krista Cameron’s Rink that won silver at the Canada Winter Games. In 1998, with Kelly now in the mix, the Gaudet juggernaut began to get rolling.

Coached by Lloyd MacCallum , and with Suzanne now at skip, the team swept the junior provincial play-offs in what was one of the most one-sided in memory. With an average age of 14 and half, the team was the youngest at nationals, yet they emerged with a bronze medal, a fantastic achievement.

More victories and a visit once again to the nationals followed in 1999, but it was in 2000 that the team really made the next step. Robyn MacPhee joined the ranks, and the team that was to enjoy such phenomenal success was now set. Another provincial championship was followed up with a silver medal at the nationals in Moncton, where they lost a narrow 7-5 decision to Saskatachewan’s Stefanie Miller in the final.

With that experience behind them – as well as another provincial championship, the foursome set off to St. Catherine’s Ontario shooting for that gold medal. With a 10-2 record posted in round-robin, the team defeated Ontario in the semi-final before setting up the re-match with Stefanie Miller’s Rink. With Kelly Higgins setting the tone with her play at lead, the Gaudet Rink curled beautifully, and it was fitting that Suzanne secured the 5-3 victory by curling to the button in the final end.

The team returned to an ecstatic welcome by the proud folks of Summerside, but as coach Paul Power exclaimed, the job was only half done. Setting off for Ogden, Utah for the Worlds, accompanied by a large gathering of family and friends, the team were confident and this showed in their round-robin play, posting a 7-2 record before defeating Japan comfortably in the semi-final.

24 years earlier in Quebec City, Charlottetown’s Bill Jenkins and his team captured the men’s junior world title by defeating Sweden 9-5 in what was remembered as a classic final. In 2001 the Gaudet Rink had a chance to do the exact same thing, as their challengers on that March Saturday were the defending champions, Matilda Mattson, also from Sweden.

The Gaudet Rink quckly went into a 3-0 lead, but the Swedes clawed back with three straight steals to edge ahead 4-3. Suzanne showed her fighting qualities by drawing to 4 foot in the 10th to force the extra end, but the hammer belonged to the confident Mattson, and the Swedish skip kept things clean, setting herself up for a clean path to victory with her last shot.

12 months earlier Mattson had claimed the world title after Stefanie Miller’s final rock was too hard and went through the rings. This time it was Mattson’s turn to play the final rock.

“I thought it was all over,” admitted Stefanie Richard. “All we could do was watch and I had tears in my eyes when she was in the hack.”

30 seconds later those tears of disappointment had turned into tears of absolute joy. For the first time all game, Mattson misjudged the weight and the pace of the ice – as it crept slowly down the rink, things began to stir in the Gaudet camp.

“I thought it looked heavy,” said Stefanie, “and as it got closer I yelled to Sue that we should start to sweep.”

“I was looking at it come down the ice and my heart was pounding,” said Suzanne in the aftermath. “I yelled to Stefanie that she sweep, and she did, for all she was worth.”

The images of the red-headed Richard sweeping like fury, and jumping in the air as the rock crept over the line, are as clear today for most Islanders as they were five years ago when they sat cheering in front of their television screens. When “O Canada” played and the girls received their medals, the sense of pride could be felt all the way back home in Summerside, and especially here, at the Silver Fox.

Once again they had a heroes welcome, twice as big and twice as grand as before. Instant celebrity status was upon them, and everybody in the country was asking about this place called Summerside that can produce such excellent curlers. They were OUR champions, and we were very proud.

In 2002 they came so close to repeating the story. Carol Webb, who had manfully performed the duties of alternate in Utah and had generously given her gold medal to coach Power after their win, took the place of the over-age Stefanie, whose junior career had come to an end.

There was nearly another fairytale. After another nationals win, fittingly right here in front of the home town fans at the Silver Fox, the girls had another shot at the Worlds, this time in Kelowna, B.C. It was not to be, however, as the team lost to eventual champions U.S.A. in the semis, before securing the bronze medal with a win over Italy. It was still a fitting end to what was an excellent junior career.