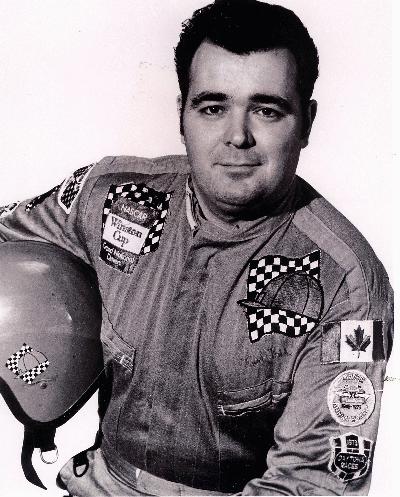 Some people in their career have a single Hall of Fame moment – one specific act or event for which they will always be remembered. Others have a Hall of Fame career – one where a consistent level of excellence is achieved over a period of time. Earl Ross is unique in that he can claim both – he has that one career defining moment on his resume, for which we he will always be remembered, but the record books will show that for many years he was one of Canada’s finest race car drivers.

Earl was born in Fortune, PEI in 1941 before his family moved to Ontario when he was 12 years old, and he has been a resident of that province ever since. He has put the community of Ailsa Craig on the map, and they proudly display his picture on the road signs coming in to the small town. He has never forgotten his Island roots – his mom Elsie still lives here – and he comes back as often as possible to visit the many family and friends he still has on the Island.

Earl always loved cars from a young age, and his first car was a hobby that he built himself to race on the local circuit. He won his first race, and from then on he was hooked. Racing became his passion, his life.

Long before NASCAR came calling, Earl made his name turning laps mainly in Ontario, as well as places like Delaware and Fort Wayne. 1970 was his big year – he won nine of ten international stock car races held in Ontario that featured drivers from across Canada and the United States, and in 1972 he won the Export A series, a stock car series that was run in Eastern Canada.

In 1971 Earl and some racing buddies took a trip south to take in the Daytona 500 event. It was to prove a key moment in Earl’s life, for it was while sitting in the stand with the thousands of other people that the dream to race at this level really took hold.

The chances are that it would have remained a dream, if it was not for the Carling O’Keefe Brewery. In 1973, the brewery, which was controlled by Rothmans, whose parent South African company used racing to promote beer and cigarettes, decided to run a car at the Daytona 500 to promote its Red Cap brand. They wanted the best driver in Canada, and that happened to be Earl.

“It was unbelievable,”  Earl said in an interview later on. “They approached me – three years on from sitting in the stand with this crazy dream, I was going to race in the biggest event on the circuit.”

NASCAR then, just as it is today, was big business with tremendous exposure. It was a time when the King ruled the track, Richard Petty, along with the likes of David Pearson. Earl had hit the big-time.

Earl qualified for his first Daytona 500, and he also finished 3rd in his first super speedway start, the ARCA Daytona 200.

Using NASCAR legend Junior Johnson engines, Earl enjoyed a banner 1974 season. In 21 races Earl recorded numerous top-five and top-ten finishes, battling fender to fender with the greatest in the sport. That season he finished in a very credible 8th place, and with it, he earned the title NASCAR Rookie of the Year.

It was on September 29, 1974, that Earl wrote himself into the record books at the Martinsville Speedway during the Old Dominion 500. After qualifying 11th, Earl drove the race of his life, beating Buddy Baker to the line by more than a lap. Nothing was going to stop him that day, and he even drove the last 100 laps on no brakes.

That win at Martinsville earned Earl instant celebrity status, and its magnitude can only be appreciated when one considers that the next non-American to win on the circuit was Juan Pablo Montoya in 2007, 33 years after Earl’s great day.

The 1974 season was to be Earl’s one great year on the circuit. Carling cut back their support to fund races mostly in Canada, and Earl stayed loyal to the team that had given him his big chance. Coca-Cola sponsored Earl to drive at Daytona on two more occasions, in a car emblazoned with the Olympic rings and the famous Coca-Cola emblem, but at the end of 1976 he was back for good on the Canadian circuit. His brief but glorious NASCAR career spanned a total of 26 races, and a record of one win, five top-5s, and ten top-10s. There was some interest from other teams for Earl to drive with them, but he understood the value of loyalty, and he has no regrets to this day on leaving the circuit.

Earl continued to race, and win in a number of regional racing series throughout the 1980s and 1990s, but after a four year spell with Ford on the CASCAR circuit in the early 90’s, he finally called it a day. “When you get older, you kind of lose your edge a bit,” he stated on his retirement. “In my younger days I would see a hole and go for it. When you’re older, you see a hole and go ‘whoa’ and you think of the consequences.”

A successfully retired businessman who loves to play golf, Earl is still in demand for appearances, and when Montoya won in 2007, it was like 1974 all over again. Earl’s picture was once again front and centre, and his story was told all over again.

In 2000 he was recognized by the Canadian Motorsports Hall of Fame, and other racing shrines have since acknowledged Earl’s achievements. Finally, the PEI Sports Hall of Fame has come calling, and he is finally getting the recognition he richly deserves from his home province.

The Hall of Fame is all the better for having Earl Ross as one its inducted members for 2008.