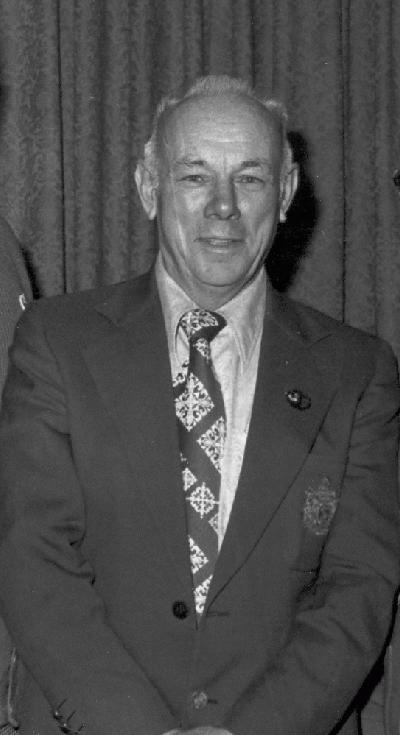 Frank “Duck” Acorn was a lifelong athlete and builder of sport on Prince Edward Island. Endowed with the enthusiasm and high energy to undertake any task to which he committed himself, “Duck” made a significant contribution to the development of a variety of sports in this province. The result of his years of dedication has been the enrichment of the quality of life for thousands of citizens who enjoy the “horses”, hunt the elusive pheasant, or frolic at the “over 50” dances.

Born September 24, 1910 in Charlottetown, Edgar Franklyn “Duck” Acorn’s first exposure to horse racing came at the tender age of nine when his father took him to see a race at the Charlottetown Driving Park. From that event, which took place in the fall of 1919, until the spring of 1981, Duck Acorn did not miss a single race or a day of work at the C.D.P. This simple statement of fact exemplifies the kind of dedication that was so characteristic of this man.

He commenced work at the C.D.P. under C. R. Smallwood in 1923 and continued under a succession of prominent presidents including Mr. Boulter and Col. D. A. MacKinnon. In 1946, when the C.D.P. was sold by Colonel “Dan” [inducted 1979], Duck became one of the complex’s twelve directors – a group that came to be known as the “twelve apostles.” Over the years, he occupied a wide range of roles at the track, including runner, program director, coordinator of pari-mutuels, classifier, race secretary, and, eventually, his most well-respected position as Secretary-Treasurer. Duck’s visionary leadership is perhaps best exemplified by his instrumental role in staging the first Evening Patriot Gold Cup and Saucer race along with Bill Hancox in 1959; this race has since developed into one of the most prestigious harness racing events in eastern Canada. Duck also organized the Duck Acorn Stakes for three year olds, a race that is still held annually. He was an active member of the P.E.I. Colt Stakes Association at its formation in 1934, and in later years was made an honorary director of the organization. He was also made an honorary directory of the P.E.I. Standardbred Horse Owners Association, and named Horseman of the Year in 1992.

In hockey, “Duck” had the distinction of playing for the Junior, Intermediate and Senior Charlottetown Abegweits, all in the span of the 1930 season. He left the Island league the following season to perform with the Sydney Millionaires. Later in life, Duck was active in hockey as a coach, helping to lead the Miltion’s Old Spain team of Charlottetown to victory as the Island hockey champs of 1960.

It was in the sport of curling that “Duck” best demonstrated both his playing ability and his organizational skills. He started curling in 1940 and quickly established himself as one of the leading skips in the province. He won the two-year, four-year and eight-year championships, and then proceeded to take the British Consols’ Trophy – one of Island curling’s top honours – in 1947, 1951 and 1953. His team was also runner-up on eight occasions: three at the Open Men’s level, four at the Senior Men’s level (to Dr. Wen MacDonald [inducted 2004]), and once at the Mixed level.

Duck became involved at the administrative level of curling coincident with his competitive involvement. He became president of the Charlottetown Curling Club in 1948 and remained in this office until 1951. During his term as president, he succeeded, after a lengthy battle, in having females admitted to membership in the Club for the first time. In 1958, the honour fell to Duck to broadcast the Canadian Schoolboy Curling Championship live for the radio station CJRW, the first such play-by-play of this competition. He was chairman of the first Seagram’s National Mixed Curling Championship held in Charlottetown in 1973, and publicity chairman for the Brier competition in 1964. In addition to his provincial involvement, Duck was Prince Edward Island’s senior representative at the national level for thirteen years, from 1970 to 1982. He was an honorary member of the Charlottetown Curling Club, and in November, 1981, was nominated to the prestigious Governor Generals Curling Club.

In addition to his extensive involvement in harness racing and curling, Duck Acorn was an ardent hunter and conservationist. He was an active member of the P.E.I. Fish and Game Association beginning in the early twenties, and occupied every executive position in the organization. In 1945, he was instrumental in bringing ringneck pheasants to the province, along with Dr. “Gus” MacKenzie, Wally Rodd and others. They arranged for the release of these beautiful game birds, and since that time, the birds have provided many hunters with the ultimate thrill in upland game hunting. The following year, Duck spearheaded the formation of the Pheasants Unlimited Club, an organization which monitored the breeding and subsequent hunting of the pheasants. In 1978, he was elevated to the position of honorary member of the P.E.I. Wildlife Federation.

Duck Acorn was also a very talented golfer, taking up the sport in his later years. He shot the first hole-in-one at the Rustico Golf Club, and was reputed to have had a golf score better than his age every year since he turned 73. He was also an honorary member of the Belvedere Golf Club.

When reflecting on his many good years of active participation in Island sports, Duck Acorn came to the realization that the numbers of senior members in all sports seemed to be declining. Wanting to remedy this situation, Duck, in the manner characteristic of his ingenuity, created the “50 and Over Club” in 1978. The objective was to promote senior sport and social activities which included curling, golf and a monthly dance. The program went on to become one of Duck’s most successful endeavours, remaining highly popular for several decades.

Frank “Duck” Acorn passed away on the morning of August 17, 1998, following congestive heart failure. The legacy of his leadership is evident in many areas, most notable in horse racing, curling, golf and the Fish and Game Association. In each instance, he gave much more to the sport than he gained in return. Duck loved to participate in sport and valued above all the friendships that it could forge; his foresight made it possible for thousands of others to participate in and benefit from sport as well.