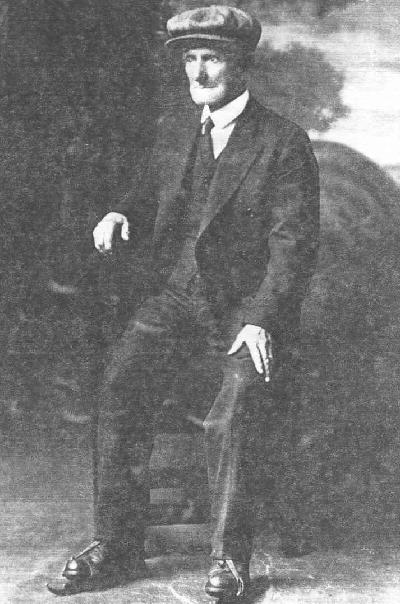 Everyone has heard the story of the thirty-year old Canadian being humbled by that spry and apparently ageless sixty-year old Swede.  However, it was Wellington, P.E.I.’s Joseph Arsenault that was recognized in 1932 as the skating champion of the world for his age class, all of 93 years.  It seems like a story for Ripley, and indeed it was to be, for the story of the legendary Acadian Skater was carried in that famous syndicated column, Ripley’s “Believe It or Not,” throughout North America in the 1930s.

Born January 23, 1840, at Egmont Bay, Joseph Arsenault – or, as he was commonly known, “Joe Carise” – grew up on the pre-Confederation Prince Edward Island.  This was in most respects a pioneer society, whose pleasures were of the simple variety.  Young Joe’s passion was for skating, and he cherished his pair of “Woodstock” skates, made in the original style with the blade curled at the front.  Strapping these to his boots, Joseph would step onto the frozen Ellis River below his home to skate the three miles to Sunday Mass at the Grand River Church.

In these times before paved roads, Joe would walk through trails in the forest to his school miles away in St. Eleanors.  By age 16, having achieved his teacher’s certificate, he would surprise his students by skating several miles to classes at the Cascumpec School.  Joe would later claim that this very early belief in physical exercise in the great outdoors was responsible for hardening up his system and giving him the powerfully-muscled limbs so vital to his later skating exploits.

Joseph Arsenault left his teaching post in 1873 for the position of station agent at Wellington on the old P.E.I. Railway line, a job he would fill until 1915.  He would also serve locally as Justice of the Peace. An active sportsman, Joe trained his own stable of horses which he drove at the Wellington Lakeside track and throughout the Island.

Upon the opening of the Wellington Rink in 1930-31, Joseph Arsenault once again strapped on his ancient “stock” skates and adopted a daily routine of one hour’s skating, soon discovering that he was able to cover the ice with most of his old-time form.  Skating exhibitions at home and on the mainland followed, and the crowds delighted to watch his graceful stride between periods of hockey at Summerside’s Crystal Rink or at local meets.

His challenge to all comers over 85 years of age to compete with him in a three-mile race was first issued in 1930-31.  Although no challenger ever stepped forward, Joseph Arsenault was officially acknowledged in March 1932 as the “World Champion Aged Skater” by the Montreal Amateur Athletic Association.

Arsenault died in 1934 at the age of 94.  He was inducted into the Prince Edward Island Sports Hall of Fame on May 29, 1983, under the category of “Great Stories of Island Sports.”