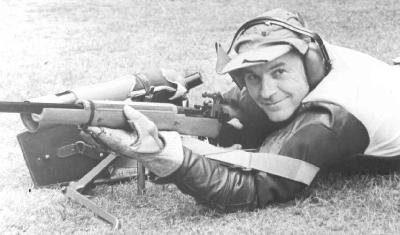 Ranked among the world’s best shots in international big bore rifle competitions, Bob Barwise became one of this province’s most celebrated ambassadors of sport. In his shooting career, Bob traveled from the Caribbean to South Africa to compete in shooting tournaments, achieving success at the annual Bisley, England matches, marksmanship’s most prestigious competition.

Born March 13, 1927 in Bedeque, Prince Edward Island, Robert Claude Barwise first learned the basics of rifle shooting under the direction of Mary MacLennan Lea [inducted 1970], a former Canada Bisley rifle team competitor, who was then a teacher at West Kent School. A member of the Royal Canadian Mounted Police as a young man, Bob Barwise began his competitive shooting career in 1948.

Very few athletes can match the 175 separate trophies that Bob Barwise won in regional, national and international competition. The perennial Island rifle champion for over two decades, Bob won four Atlantic high power rifle titles, including the first such championship. In 1983, when the Dominion of Canada Rifle Association announced the seven leading Canadian marksmen who had achieved the “Super Master, Triple A Rating” for the years 1977 through 1982, the name of Bob Barwise headed the list. In 2001, Bob received one of his greatest honours – an induction into the D.C.R.A. Hall of Fame.

At the provincial level, Bob Barwise was at the winner’s podium since the early 1950s, and among his awards were the toast of Island shooting silverware: the Governor-General’s Silver Medal, the Lieutenant-Governor’s Silver Tray, the “Bisley” Jones Memorial, and the MacDonald Tobacco Co. Match awards, to name a few.

Nationally, Bob Barwise was known by fellow shooters as “the Big Gun from the East,” and consistently placed among the top marksmen at the D.C.R.A. Matches held at Ottawa’s Connaught range. In 1976, in their first presentation of this honour, the Dominion of Canada Rifle Association presented Bob Barwise with the Des Burke Award. This award is given annually to the competitor who demonstrated good sportsmanship and good character while maintaining a high level of shooting prowess. Created in recognition of the character and excellence of marksmanship in rifle competition of the late Lieutenant-Colonel Desmond T. Burke, E.D., M.D., D.M., a process of nomination by the various provincial rifle associations is used to choose the award winner.

At the international level, Bob Barwise was named to 17 of Canada’s 18-man Bisley Rifle Teams, representing this country in competition against other Commonwealth and NATO teams. In July of 1977, Bob captained the Canadian Bisley Team to the Grand Aggregate title, while finishing high in the Queen’s Prize and Prince George matches himself. On July 24, 1980, out of the world’s top 1,200 marksmen gathered at Bisley, England, Bob Barwise alone would shoot an amazing 21 out of 21 bull’s-eyes to win the first stage of the Queen’s Prize, shooting’s most revered individual award. In total over all his trips to the Bisley Meet, he reached three Queen’s finals and was in the top 50 of the individual Grand Aggregate four times.

Over the decades, the Island sports public become familiar with such headlines as “Barwise Back as Champ Again” or “Barwise Off Again to Bisley.” Yet more unheralded was Bob’s tireless devotion to the establishment, development and very existence of shooting as a major sport of Prince Edward Island.

As president of the Provincial Rifle Association, a position he held on and off since the early eighties, Barwise entered the scene just as the federal government was dropping its services to the local shooting range. As a civilian, it was Bob Barwise who insured that all schedules were filled, correct ammunition on hand, and targets prepared, as well as the hundred lesser details ironed out.

Although Bob Barwise continued to shoot competitively for six months each year, he managed to devote time to helping and teaching younger shooters in rifle skill and safety, such as the Navy Cadets and Queen Charlotte Club. Bob also managed to create an international atmosphere for his sport by establishing the friendly series of shooting matches held each year with the U.S.A. known as the “Mini-Palma.” Bob’s spirited internationalism also extended to regularly arranging for the entire 18-man British Rifle Team to visit and enjoy the Island’s hospitality while competing on regional ranges.