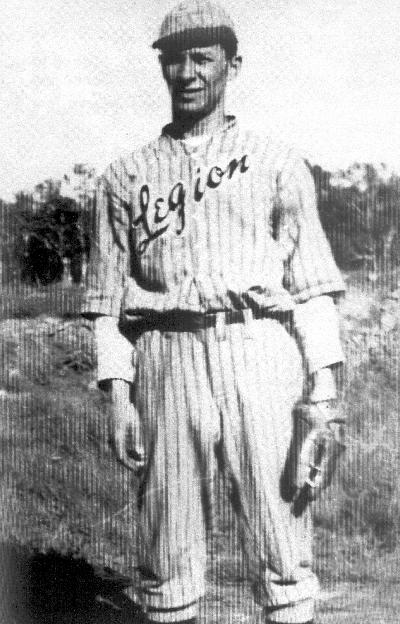 When baseball pitcher Harry Bernard moved down from Tignish to Summerside in the early ’30s, little did he suspect that his eldest son Gerard would become Summerside’s greatest ball-player from 1945 through 1952 – but that is exactly what took place.

Born September 6th, 1923, in Tignish, at the Island’s northwest tip, Gerard “Joe” Bernard was throwing a baseball before he was ten years old.  As a teenager, Joe would perform in the Summerside Town League. In one most memorable game, young Joe displayed a glimpse of the brilliance that was ahead of him: facing such notable fence-busters as “Dope” Daley, Harry Crossman, Davis Lidstone [inducted 1969], Jimmy Dodds, and “Blackeye” Clow, Gerard Bernard struck out a total of seventeen batters.  The green kid from Tignish had truly arrived; that smoking fastball was to terrorize these and all other Maritime hitters.

Organized sports in the region were disrupted by the outbreak of the Second World War, and so it was not until 1946 that Gerard’s pitching career began in earnest.  Charlottetown’s dominance of Island baseball was officially over.  The pitching duels between Gerard and the capitol city’s “Lefty” McAleer [inducted 1983] had the quality and drama of a showdown between gunfighters.

Gerard led the Summerside All-Stars to the Island Intermediate title in 1947; however, it would be the next season, 1948, that would be considered his greatest year of all.  His fastball was a virtual white blur, his physical capacity at its peak, and Joe would go on to win six out of the seven games necessary to bring the Summerside team the Maritime Crown.  The 1948 championship team has been regarded by most observers as the most brilliant in Summerside’s history.

1949 brought a change in team management; the squad became known as the Curran & Briggs team, with Charlie Hogan [inducted 1995] remaining as coach.  In the 1949 final with Charlottetown, Joe Bernard notched his most courageous performance; in the crucial game of the series, with the bases loaded and no Charlottetown outs, Bernard had to face the three biggest bats: Eddy Lund, Roy “Buck” Whitlock [inducted 1977], and Glen Matheson.  With cool nerve and an even cooler hand, Joe struck each man out.  The game was won by a score of 1-0, and the momentum of the series had reversed.  Summerside would go on to capture the championship once more.

1950 saw Summerside win the Maritime Championship by default, and in 1951 they lost in the Maritime Championoship finals to Middleton, Nova Scotia.  In 1952, Gerard’s blazing speed suddenly left him, one of those mysteries of sport.  Following his career as a player, Bernard turned to coaching the next few years, leading the Summerside Junior Legionnaires to the Maritimes finals against Liverpool in 1961, and coaching the Canada Games team from Prince Edward Island at Halifax in 1969.

As a hockey player, Gerard was a member of all Summerside teams after the War. He was a prolific scorer, and his team captured Island Intermediate crowns in 1948-49 and 1949-50.

A long-serving director of the Prince Edward Island Sports Hall of Fame in later years, Bernard distinguished himself throughout his athletic career as a player with class, both on and off the field.  His unsurpassed talents as a competitor would be characterized by intensity, sportsmanship and personal courage.