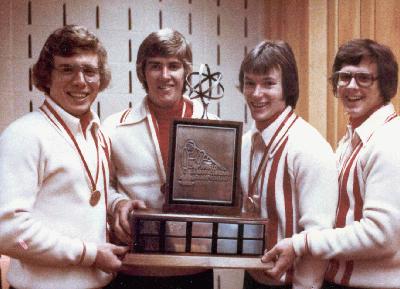 On July 3, 1977, the Prince Edward Island Sports Hall of Fame recognized the tremendous accomplishments of the 1977 Bill Jenkins Curling Team, made up of Bill Jenkins, Alan Mayhew, Sandy Stewart, John Scales and Coach Doug Cameron [inducted 2001]. This team skilled group of young people had an excellent record in their curling career, but their winning of the World Junior Curling Championship title at Quebec City in March, 1977 was without question their greatest victory.

Skip Bill Jenkins began curling in the winter of 1967-68, and by 1972, had joined with John, Sandy and Alan to create the world-class team.  In 1973, as a schoolboy rink, they were runners-up at the Provincial in Crapaud.  In 1974, they were successful at the Provincial Schoolboy played at Summerside, and as a result represented the Island in Ottawa at the Nationals, finishing with a 3 and 7 record.  They were repeat winners in Charlottetown in 1975, and at the Nationals in Edmonton, they had a record of 6 and 5.  In 1976, they were Provincial winners again at Summerside, and went on to capture the National Title in play at Kapuskasing with a 10 and 3 won-loss record.  The rink originally tied for first place with three other teams following the Round Robin Bonspiel, but in the semi-final playoff, the Bill Jenkins foursome disposed of Nova Scotia 7-2, and moved on to defeat Alberta 9-5 in the final and capture the championship.

This set the stage for the team to represent Canada at the World Junior Curling Championships in Quebec City in March 1977, which they did with pride and integrity. After the ten team round robin series, the Jenkins Rink qualified for the semi-final playoffs with a 5 and 4 record.  After defeating the U.S.A. 8-6, they went to work on the team from Sweden. They were tied at 2-2 after three ends and picked up one in the 4th for a 3-2 lead.  Then, in the 5th end, Bill Jenkins made two unbelievable shots to steal three and make the scoreboard read 6-2.  The team went on to a 9-5 victory over the Swedes in what has been described as the most outstanding game ever curled by anyone at the World level.

The Jenkins rink insisted that much of the credit for their global victory belonged to coach Doug Cameron, whose words of wisdom had helped guide them out of a four-game losing streak into a six-game winning streak. Doug placed 2nd in the first National Schoolboy held in Quebec City in 1950, represented PEI 7 times at the Brier, was once a runner-up in the CBC Classic, was a runner-up in the International Bonspiel at Maple Leaf Gardens Toronto in 1965, and was one of the first group of 15 to be inducted into the Canadian Curling Hall of Fame in 1973.