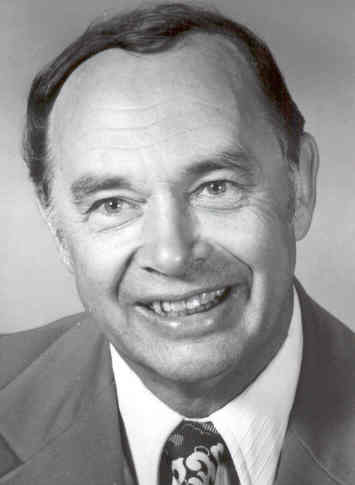 Born April 30, 1927 on his father’s farm in Victoria, P.E.I., David MacGregor Boswell would quickly establish his lasting interest and proficiency in a variety of athletic competitions. By 1946 David Boswell was acknowledged to be one of Canada’s top quarter milers. His Island record of 49.7 seconds in the 440 yards, which he set in 1947, is one of the two oldest standing provincial track records.

It was at college that Boswell’s combination of athletic skills and innate intelligence was able to shine. He captained the Mount Allison University Track Team in the 1947-48 season. While at Dalhousie University, he became that excellent institution’s first and only Four Letter man in intercollegiate sport, becoming the only student to win a gold “D” from Dalhousie in one year. The sports he tackled were track and field, football, hockey and boxing, in which he was an intercollegiate finalist.

This former Maritime College Quarter and Half-mile Champion and record breaker also took part in the Canadian Pre-Olympic Trials in 1948, where he won the 400 metre race. A member of the 1949 Charlottetown Abbies, who were Maritime Senior Track and Field Champions, David Boswell was a Canadian Finalist in the British Empire Games Trials that year.

The eight year coaching record of Boswell is no less impressive. At Stanstead College in Quebec in 1955, he established a provincial high school record by winning provincial interscholastic titles in hockey and in basketball in the same year. He coached Ashbury College in Ontario to a close second in the Dominion Interscholastic Track and Field Championship held in Montreal in 1958, and produced several individual provincial and national record-breakers in track and field.

From 1960 to 1968, Dr. David Boswell served as the Director of Alcohol Studies and Physical Education for P.E.I., before becoming the Provincial Director of Youth and Fitness for the P.E.I. Department of Education, a position he held for 28 years. The energetic drive that he displayed on the cinders was focused upon the advancement of health, physical education, recreation and amateur sport within the province. A pioneer in the field of alcohol studies and a frequent contributor to periodicals dealing with physical education, Dr. David Boswell epitomized the classic ideal, “a sound mind in a sound body.” In 1976, he received the highest physical education award in Canada, the R. Tait McKenzie Honour Award of the Canadian Association for Health, Physical Education and Recreation, at the International Congress of Physical Activity in Sciences in Quebec City. While Dr. David Boswell passed away June 17, 1998, he will always be remembered as a great man, deserving of his place within the P.E.I. Sports Hall of Fame.