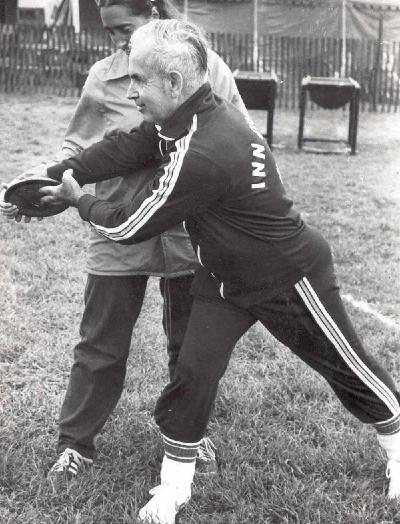 Master Athlete, builder of sport, volunteer, and model citizen – Phil Bower was all of the above and something more.  His sport record reveals a steady string of achievements and successes despite the fact that he was blind.

Philip Churchill Bower was born March 17, 1920, in Upper Ohio, Shelburne Country, Nova Scotia.  He grew up a typical youngster, fond of sport, until he was hit by a frozen snowball, thrown by a schoolmate, leading to blindness by the age of fourteen.  With gritty determination and the will to triumph despite his injury, Phil continued his education at the Halifax School for the Blind.  Later, he attended Dalhousie University, where he graduated with a Bachelor of Arts Degree in 1944 – a singular accomplishment at the time.  In the same year, Phil would join the staff of the Canadian National Institute of the Blind.  His work with this organization brought him to PEI in 1954, where he served the Island community as the District Administrator of the CNIB until his retirement in February 1985.

One of Charlottetown’s most familiar sport figures, he won medals at every Canadian Championship for disabled athletes since these games were initiated in 1976. Phil was also a Canadian record holder, and the medals he won over the years represent a true spectrum of sports, ranging from javelin, discus and shot put, to lawn bowling, swimming, long jump and the 60-metre sprint.

At the 1978 Canadian Championship, Phil Bower was selected as the nation’s best athlete over age 40.   “I often wish that I had these games around forty years ago,” stated Phil, “when I was in my youth and able to compete better, but there isn’t any reason why I can’t compete now…”

And compete he did.  At the 1984 National Championship, held in Toronto, Phil Bower would again show Canada that age is not a factor when it comes to winning medals.  At age 61, Phil captured two gold and five silver medals in Masters’ competition for Class A Athletes over the age of 50.

Did Phil Bower consider himself an example to younger blind or disabled people? In a word, yes.  Without any false modesty, Phil would reply to this question, “I think I am an example because I have a competitive spirit and that is important to get by, especially for the blind, and, if the younger blind see I can enjoy sports at my age, it also shows them they can enjoy sports at their age.”  Phil has been honoured with many awards for his work with the visually impaired, his sports involvement and his community service. Among his greatest thrills were being inducted into the PEI Sports Hall of Fame in 1985, and being named a Member of the Order of Canada in 1989.

Phil Bower passed away on March 7, 2005. Although he was blind, he was neither disabled nor deprived. He was active in educating the Island and the nation about the needs and abilities of the blind. Phil showed us, perhaps more effectively than any other provincial athlete, that sport is truly the universal language.  To use Phil’s own words “Just knowing I can go out and compete makes me feel free.” The freedom that comes from competition – such is the legacy of Phillip Bower, one of the “Great Stories of Island Sports.”