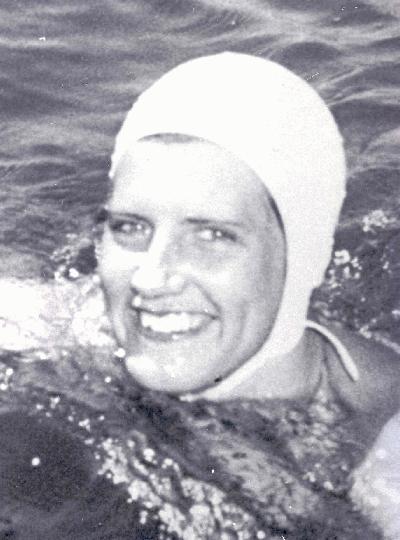 Evelyn Henry Brown, a true pioneer of distance swimming on P.E.I., was born on April 5, 1928 in Charlottetown. Raised on the shores of Keppoch, she became fond of swimming from a very early age, and conducted swimming classes every summer at her home. Evelyn was a natural athlete. She enjoyed riding and softball, and this tall girl was a force to be reckoned with as a guard on her Prince of Wales College basketball team. Distance swimming, however, remained her true passion. Evelyn swam across the Charlottetown Harbour on several occasions between 1946 and 1951. On one memorable trip, she crossed from Victoria Park to Keppoch Shore and back – a distance of over six miles – in under four hours.

It was in the summer of 1951 that Evelyn achieved her greatest swimming success. She began by capturing the distance swimming events for women at the “Festival Week Regatta.” She then decided to undertake her most well-known swimming challenge – the crossing of the Northumberland Strait – just because it was “something to do.” This would make her the first known swimmer, male or female, to conquer the nine mile expanse of water that separates P.E.I. from the mainland.

On that historic and memorable morning of July 15th, 1951, Evelyn, accompanied by her father Stewart Henry, her brother Edwin and A. P. Ceretti of Borden, traveled to the starting point of Cape Tormentine in Mr. Ceretti’s motor launch. She set out from Tormentine at 8:26 a.m. against the strong Northumberland Strait tide, with her father and brother at close range in a small punt. The strong current carried her far off course, especially during the final three miles of her journey, but she was determined, and in the end was able to fulfill what she had set out to do. Along the way she was nourished by fruit juice, tomato juice and a couple of sandwiches. And although it was suggested she hold onto the side of the punt when taking this nourishment, she refrained from so doing. Thus, at 5:13 p.m., after nearly nine hours in the strait, Miss Henry slapped the pier at Borden, Prince Edward Island. Only then did she allow herself to be helped from the water, tired and proud, but none the worse for her outing.

Evelyn graduated from nursing at the P.E.I. Hospital in the same year as her historic swim. Shortly afterwards, she married Douglas Brown of Prairie in the state of Queensland, Australia, where she remained for the rest of her life. She has been an inspiration to a generation of young female swimmers including Barb McNeill, the first Islander to conquer the English Channel, and Andrea, her daughter, who repeated her mother’s feat in 1989. Evelyn’s accomplishment has demonstrated that not all great moments of athletic achievement take place in front of a roaring crowd, and that a person can accomplish truly remarkable things with drive, determination and family at their side.