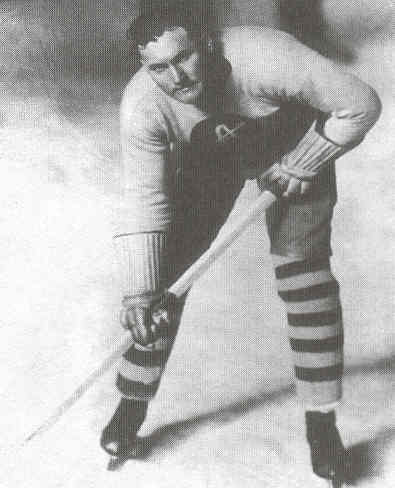 Charlie Cahill, at 21 the first  Prince Edward Islander to play in the National Hockey League, was one of the select few who made that leap from an intermediate or a senior league.

Born January 4, in P.E.I., Charles Cahill First learned the game of hockey in  the old Summerside Crystal Rink, a building named after one of the greatest club teams to play in the Maritime circuit, the Summerside Crystals.  With the same Crystals team of 1924-25, Cahill was instrumental in their toppling of the Great Charlottetown Abbies of that year, a team which had been Maritime Champions for the three previous years.  In the Maritime finals of that year which pitted the Crystals against the Sussex Dairy Kings, Charlie caught the eye of a Boston Bruins scout.  Invited to the Bruins training camp in the fall of 1925, Cahill was signed and played a regular position along right wing for a year and a half, finishing the 1926-27 season on the Bruins’ farm team of the period, Springfield Indians of the Canadian-American League.  It was in this circuit that the 23 year old Cahill achieved his
greatest success.  Traded in the off-season by Springfield to the New Haven Eagles, Charlie responded by being that team’s second highest scorer in the 1927-28 season.  Another league team, the Philadelphia Arrows, took over his contract from 1928-31.  Again the N.H.L. was interested in the Cahill talent, and the Montreal Maroons of that league were unsuccessful in purchasing Charlies contract.  A leg injury in the 1930-31 playoffs while with the Philadelphia Arrows eventually forced his demise from the professional ranks at the early age of 28.

Returning to Summerside and to the Crystals team of 1936-37, Charlie, as irony would have it, left the game at the same point his starry moves begin to crystalize; in his final game, although out of shape and overweight, Cahill would score four goals and add two assists in defeating the arch-rivals Abbies.  The boos of the early periods were transformed into cheers, and near the end of the game Cahill received a standing ovation.

Until his death on June 5, 1954 at the age of fifty, Charlie Cahill maintained his interest in hockey refereeing locally and also harness racing.

The Summerside Rink, built in 1954, was renamed Cahill Stadium in his memory.