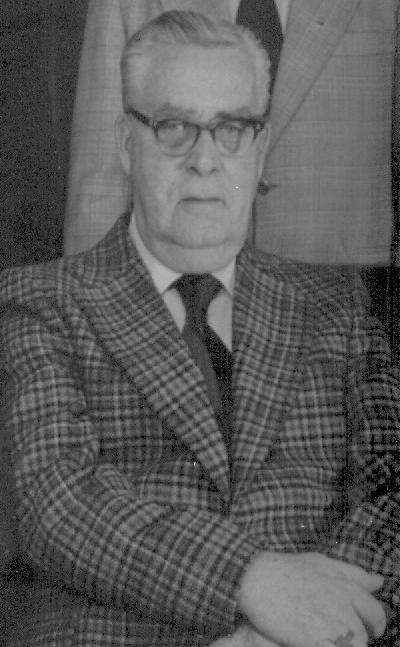 His own fastball would never intimidate the hitter at the plate, and his wristshot would rarely find its mark behind the goaltender; however, for the sporting community of Prince Edward Island, the name of J. Puis Callaghan is synonymous with excellence in sports.

Born September 2, 1914 in Charlottetown, Joseph Pius Callaghan would exhibit a fascination with the world of sporting endeavour at an early age.  The lone wolf of his father’s second family, young Pius might be found close to the living-room radio in the mid 1920s, as play-by-play accounts of major league baseball crackled over the airwaves, or Foster Hewitt brought Saturday Night N.H.L. hockey to the nation in the 1930s.

Quick to admit that he was not blessed with exceptional athletic ability, Pius Callaghan’s passion for sports is unlikely to be matched by even the most gifted of athletes.  His only championship of which documented evidence exists today is a doubles tennis title, won with partner Ivan Berrigan at Holy Redeemer in the 1930s.  His athletic career never went beyond enthusiastic participation on a number of Charlottetown House League teams.

Graduating from Queen Square School, he would receive his Bachelor of Arts degree from Saint Dunstan’s University in 1934.  Pius studied law with M. L. Farmer, Q.C., that same year, and was admitted to the bar in 1940; however, he chose to enter the teaching profession rather than practice law.

His teaching career began at Queen Square School in the fall of 1939.  There, he served at first as a general teacher before assuming duties as principal in 1942, a post he held until 1945.

A measure of his devotion to sports was evident in his habit of following the American and National Hockey League radiocasts, even on working nights, despite the fact that the play-by-play action rarely started before midnight.  Among his own later broadcasting achievements were the pioneering between-periods interviews that he conducted for radio stations CJRW and CFCY during the heyday of the Maritime “Big Four” League.  Following the demise of the “Big Four,” Pius Callaghan’s 1960s radio work featured the intense hockey rivalry between teams from Summerside and Charlottetown.

President of the P.E.I. Teachers’ Federation from 1943 until 1945, Pius Callaghan was also significantly engaged in the popular theatre of the province.  A winner of a Canadian Drama Award, he would give up directing plays in 1970, continuing to emcee minstrel shows until the mid-eighties.

Of his newspaper career, Pius recalls that his journalistic background when he began in 1946 was quite limited; however, over the years, as his authority widened, so too did his own skills and insight.  From this vantage point as a sports journalist, Pius Callaghan moved naturally into his next sphere of achievement, as a leader of sports management.

In 1953, he was appointed provincial representative on the Maritime Amateur Hockey Association executive, succeeding Walter Lawlor, and remaining on the executive until 1974.  During this period, he would also serve as president of the M.A.H.A from 1961 to 1963.  A singular honour bestowed upon Pius Callaghan was the J. Pius Callaghan Trophy, established in his name by the P.E.I. Hockey Association, to be awarded annually to the junior hockey champions of Atlantic Canada.

One of the genuine builders of hockey in this region, Pius was selected as the first president of the P.E.I. Junior Hockey League in the 1968-69 season.  He also served as president of the Maritime Junior “A” league.  In 1976, he was honoured by the hockey fraternity of this province with lifetime membership in the P.E.I.H.A., whom he had served as its first president from 1973 to 1976.  Pius was also named in 1973 as a recipient of the Canadian Amateur Hockey Association’s “Meritorious Award.”

An employee of the Charlottetown Driving Park from 1947 to late 1978, he graduated from selling parmutual tickets to the calculator, finally becoming Paramutual chief.  He also ran the paramutual at a number of smaller tracks.  He became a member of the P.E.I. Racing Commission in 1982, resigning in April of 1987 due to ill health.  Chairman of the Charlottetown Gold Cup and Saucer for three terms, one of Pius’ fondest moments in harness racing was his being the first Islander to purchase a triacta ticket.

J. Pius Callaghan’s leadership and intimate knowledge of local sports was fully utilized during his distinguished sixteen-year tenure as a director of the Prince Edward Island Sports Hall of Fame.  He retired from the board shortly before his induction into the Hall in 1987.

In 1988, his contribution to Island sports was further recognized by an induction into the Wall of Fame at Charlottetown’s The Sports Page Club – the first non-athlete to receive this honour.

After suffering from failing health due to Parkinson’s Disease for upwards of three years, Pius Callaghan passed away on July 31, 1990, at the age of 75.  Upon his death, it was remarked in the Guardian newspaper that “the sporting world on P.E.I. did indeed lose a good and close friend.”  Throughout his long and eminent love affair with competitive athletics, no one more than he acted as the presiding spirit and conscience for this province’s sporting community.  His sage counsel, his booming voice, and his keen eye for what distinguishes greatness in human endeavour will surely be missed by all who knew this “Godfather” of Island hockey.