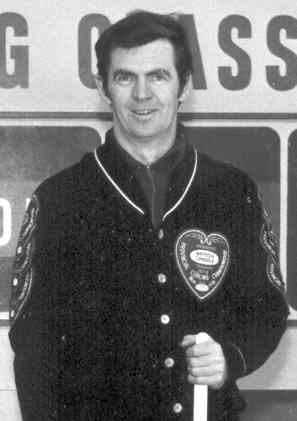 Cameron has represented the Island in seven Brier – National Men’s Championships. These include 1958,1960,1961,1963,and 1965. He also participated in two additional Briers as a mate in 1959 and 1973. Doug recorded 26 Brier wins as a skip, more than any other Maritime curler. One one occasion he finished in a tie for third and also had a fourth place finish. His nine victories as a third raises his total to 35 Brier victories.

Cameron competed during what is often referred to as the “Golden Era of Curling”. The Brier in those days featured 12 end matches, corn brooms, and no playoff round.

Doug’s teams participated in the highly regarded CBC Televised Curling Series in 1963 and 1964, losing in the final in ‘64. From 1964 to 1966 an Invitational Tournament of Champions was held at Maple Leaf Gardens in Toronto. This event featured eight of the nations best curling foursomes with the Cameron rink as the only team east of Manitoba to be invited. His best showing was in 1965 when Cameron and his teammates Allan Smith, George Dillon, Bob Dillon, finished as runner-up losing 3-2 in the final. In 1964 and 1966 they finished fourth in the round robin event with identical records of 4-3. The Cameron rink recorded victories over several Canadian and World Champions including the Richardsons, Hector Gervais, Lyle Dagg, Bud Sommerville, and Matt Baldwin

Doug Cameron competed in the National Mixed Championship in 1973 finishing with a 5-5 record. He also competed at the National Seniors Championships in 1989 and 1991. In doing so, he became one of only two Canadians to compete at all four sanctioned national championships: junior, brier, mixed, senior.

Doug was elected in the Canadian Curling Hall of Fame in 1974, their first year of inductions.

Doug Cameron has also proven himself as an outstanding coach. His most notable coaching achievement was guiding the team of Bill Jenkins, John Scales, Sandy Stewart, and Allan Mayhew to the World Junior Curling Championship title in 1977.

Always one to give back to the sport, he has held numerous volunteer  positions with the Charlottetown Curling Club, Sport PEI, and with various events. He later became a valued member of the Board of Directors for the Hall Of Fame.

The PEI Sports Hall of Fame and Museum is pleased to recognize the outstanding accomplishments of curler Doug Cameron.

In November 2007 Doug was inducted into the newly-formed PEI Curling Hall of Fame.