View All Inductees
A. Fulton Campbell - Track and Field
Inducted on July 20, 1975 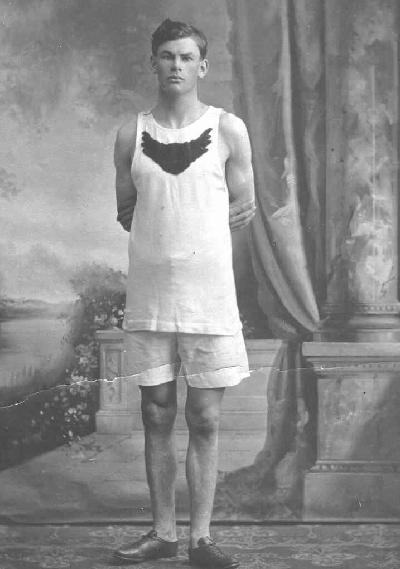 Affectionately known by many as “Fult”, Angus Fulton Campbell has been recognized as the most accomplished and complete athlete to come out of the Kings County area during the first decades of the twentieth century – a time that is remembered as the “Golden Age” of Island sport.

Born May 1st, 1892 in Montague, Fulton Campbell became active in track and field as a young teen. He excelled in running, hurdling, broad jumping and high jumping on the local and provincial scenes, and performed at the Caledonia Games in Maritime competition. He lead in all events and was especially brilliant in the high and broad jumps and the 100 yard dash.

Fulton soon joined the famous Abegweit Track and Field Team, and competed in many Maritime meets. In 1914, he easily won the quarter mile race at Halifax competing in the Atlantic Track and Field Championships.

Fulton Campbell won 40 to 50 medals during his days as a competing athlete, many of which are first place medals gained in Maritime competition. One of his greatest prizes was the high jump medal won in 1913 for his jump of 5′ 8 ½”, a rare feat at that time. His most personally satisfying triumph, however, was the day he beat his arch rival and lifelong friend Parker Hooper in the 100 yard dash – a victory that he attributed to strenuous practice at the starting block.

Before reaching his peak as a track and field star, Fulton joined the Canadian Army in 1916, later retiring with the rank of lieutenant. With the army, he was able to continue competing to some extent, not only in track and field, but also in the sport of hockey, where he performed as a very fast and accomplished right winger with his Canadian Army Medical Corp team. The Halifax Chronicle summed up Fulton Campbell’s brilliant performance with the Army Team in Halifax’s 1917 Labour Day sports meet by writing, “The feature of the day was the running of Campbell of the A.M.C. in the sprints in which he carried first prize in all events. His performance of 10.2 in the 100 yard dash is exceptional considering the track which was so soggy. His 22.3 in the furlong and 54.2 in the quarter mile compare favourably with what has been done on the track since the sports’ inception here. He has a nice free and easy style and a stride of exceptional length, and should, on a fast track, make the best of Maritime men travel.”

Following Fulton Campbell’s return home after the war, he played hockey for the Charlottetown Millionaires, winning the Maritime Trophy with them in 1919. Fult then formed the famous Abegweit Hockey Team in 1920, considered to be one of the best amateur teams in Canada from 1920 through 1924. This Abbie Team was travelling to Boston in 1923 and stopped off in Moncton where they lost to the highly rated Toronto Granites in an exhibition game 4-1. The Granites won the Olympic Gold Medal that year. The Abbies were a powerful squad suffering only one loss and a tie in 31 games played in the 1921-22-23 seasons.

In later years, Fulton Campbell continued to take a vital interest in sports, particularly in coaching, and in the development of the youth in his community. His was a familiar figure on the Brudenell golf course. When inducted into the Prince Edward Island Sports Hall of Fame on July 20, 1975, he was still a keen and astute sportsman, even at the age of 82. He passed away the following year on June 16th.