Thane Campbell played an instrumental role in building curling as a sport not only in Prince Edward Island but also across the nation and internationally. He was born in Summerside on July 7, 1895 and received his Bachelor of Arts from St. Dunstan’s University and his Master of Arts Degree from Dalhousie University in Halifax. He attended Oxford University in England as a Rhodes Scholar to study law for five years. He returned to Summerside in 1922 and began to practice law and in 1927 he established his own law practice.

Campbell joined the Summerside Curling Club in 1928 where his interest grew in the sport. He formed his own team and won the club championship in 1935.

Campbell was elected President of the Dominion Curling Association for 1941-42. In 1943, he was elected Vice-president of the Royal Caledonian Curling Club of Scotland. He held the position for several years with the organization that serves as the mother club of curling in Canada and was involved in promoting the sport at the international level.

His accomplishments in building the game of curling are many. He began an “open” Maritime Bonspiel which became the Confederation Bonspiel in 1947 which is still run today in Charlottetown. He was also responsible for the formation of a Maritime Bonspiel for junior curlers that began in 1946 competing for the Physical Fitness Trophy. He and Harold Gaudet organized “school boy” curling on the Island in 1948 which has led to the male and female Junior championships we know today.

He was appointed a trustee of the Macdonald Brier Tankard in 1946 and played a role in bringing the Brier to Charlottetown in 1964. He also chaired the board of trustees for the Dominion Curling Association from 1962 to 1973. He was a Trustee for 25 years. His involvement in curling spanned nearly 50 years. Campbell was given an Honourary Life Membership for the Dominion Curling Association in 1947 and was elected to the Canadian Curling Hall of Fame as a builder in 1974. He was inducted into the Governor-General’s Curling Club in 1967.

Thane Campbell was elected to the Provincial Legislature in 1931 and became the 19th Premier of Prince Edward Island in 1935.   He resigned as Premier in 1943 as he was appointed Chief Justice of the Province, a position he held until his retirement at age 75 in 1970. He was appointed a Companion of the Order of Canada in 1973. He was also the first Chancellor of the University of PEI in 1968. 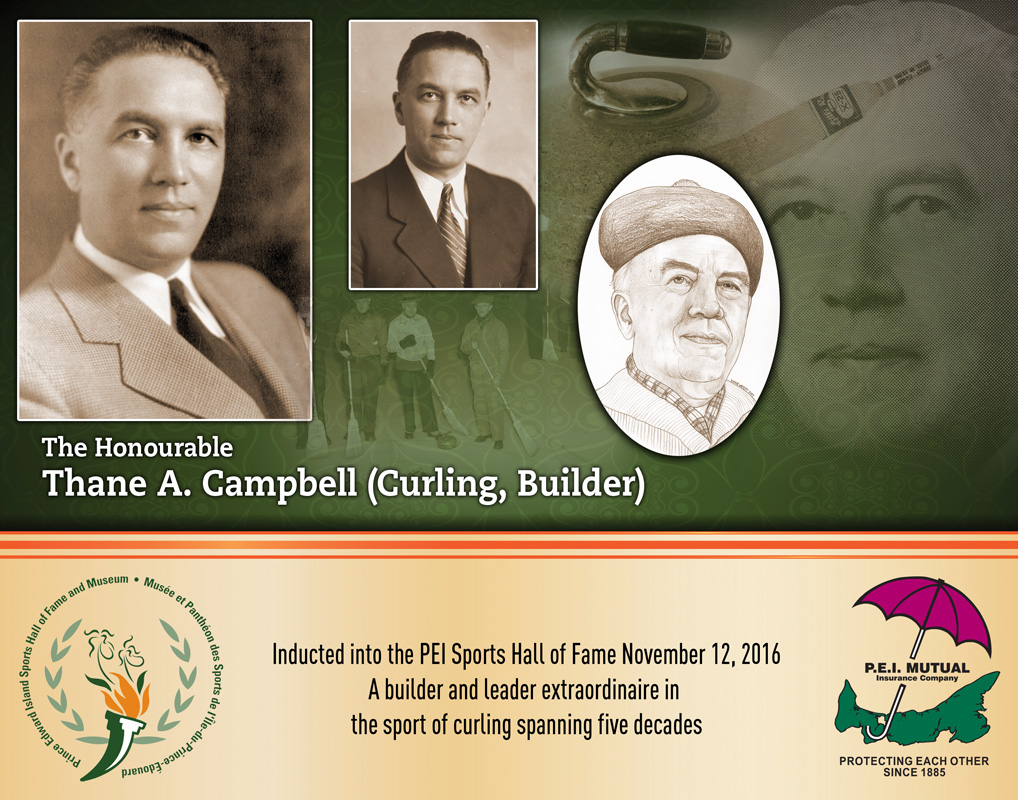