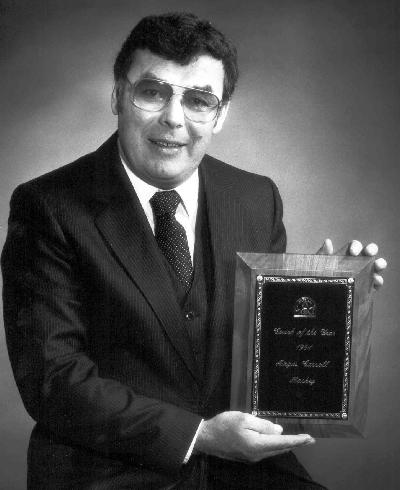 Angus Claude “Angie” Carroll was a leading figure in Prince Edward Island hockey for several decades.  Born in Parkdale, PEI in August 1936, he first gained the attention of the hockey world as a player, but his most memorable contributions to the game, and the area in which he met with the most success, were as a coach.

Lured to Montreal by Sam Pollock in 1953, Angie Carroll’s playing talents were first displayed on the national level with the Montreal Junior Canadiens.  After three years with the Montreal organization, followed by part of one season with Indianapolis of the International League, Angie elected to return to his native province. Here, he dominated Island hockey for several years as a classy play-making centre with the Charlottetown Royals, before making an early switch to coaching.

Angie Carroll took on his first coaching assignment at the age of twenty-three, when he became a playing-coach with Charlottetown Sandy’s Royals in 1959.  A star performer with those great Royals teams in his dual role as coach and player, Angie Carroll led the team to three Maritime Intermediate A Championships.

Following the termination of his career as an active player, and the demise of the Royal Hockey Club, Angie turned his attention to old-time hockey, which was starting to gain popularity in the early 1970s.  He coached the Charlottetown team at the first National Tournament in Peterborough, Ontario in 1973.  The following year, Angie Carroll coached his team to the National Championship (B Div.) at the 1974 tournament held at Lethbridge, Alberta.  Not only was Angie behind the bench, but he also took time off from his coaching duties to score the winning goal and be tournament Most Valuable Player.  The team went on to three European tournaments, losing one of these to Denmark in the final playoff game.

Angie Carroll’s biggest coaching success story, and the one that really illustrates his coaching genius, occurred in the spring of 1979.  Taking over the Sherwood-Parkdale Metros in the final week of the regular season, at a point when the team was doing quite poorly, Angie Carroll quietly transformed them into a playoff threat.  The Metros proceeded to win the Island Junior Title for the first time, ending many years of frustrating losses against their rivals, the Charlottetown Eagles. They then went on to defeat Moncton and Halifax for the Maritime Title, and a berth in the Centennial Cup Tournament.  At the Centennial Tourney, Angie’s Metros amazed the hockey world by knocking out highly-rated Guelph, the Ontario Champions, and losing in overtime play to Prince Albert in the final game.  The P.E.I. team had come closer to victory than any other Junior team from the Province.  Coach Carroll’s 1980 version of the Metros once more advanced to Centennial Cup play, finishing third.

In the fall of 1980, Angie reverted to intermediate hockey action, and played a major role in putting together the talent for the Charlottetown Islanders team that went all the way to the Hardy Cup Championship.  Coach Carroll’s Islanders completed a three-game sweep of Fredericton, Timmins and Winnipeg on its way to the first ever National Championship in a major CAHA bracket by an Island hockey team.  Angie Carroll’s flawless handling of his hockey team, often under the most difficult of circumstances, allowed this national victory to be realized.

The Carroll hockey genius has rubbed off on many Island hockey players, including his oldest son, Dunstan, who starred with one of the top American teams, the University of North Dakota.  Angie Carroll’s impressive career as player and coach reminds us of the finest quality that sport instils in us and demands of us: the ability to lead others to victory.

Angie Carroll died in Charlottetown on September 14, 2007. With his passing, Island hockey has lost a great friend indeed.