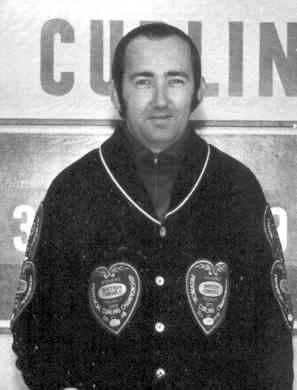 “His boyhood hero was the legendary Toronto Maple Leaf netminder “” Turk”” Broda, but fate would have a different sheet of ice in store for provincial curling great, Bob Dillon. An active participant in the “”roaring game”” for over forty years, no other islander would compete in more national curling events. His extraordinary playing ability, sportsmanship and character have truly brought honour to the sport of curling, on Prince Edward Island and throughout Canada.

Born in Charlottetown, March 14, 1937, Robert Francis “” Bob”” Dillon as a young lad would indeed make his first appearance on the local sports page as a talented hockey goaltender, first with his Queen Square schoolmates, and next with the provincial champion Charlottetown Juvenile Abbies. In a March 1955 story, below the account of the infamous suspension which led to the monumental Richard Riots in Montreal, we read of Dillon’s backstopping his Abbies to a  3-2 victory over the Summerside Juveniles at the city’s old Raceway Stadium. When Charlottetown Royals’ plucky puckstopper Frankie Roper was clipped by a stick at the Forum a few nights later, the teenager would take Roper’s place between the pipes, notching the victory with several keen-eyed saves off the Parkdale Flyers’ snipers. Dillon would also tend goal for Summerside Aces, and he would also compete on Danny MacCormack’s Maritime championship Basilica Youth Center Junior Softball team.

Unlike most outstanding curlers, Bob Dillon lacked Island Schoolboy curling experience, attending his first MacDonald Brier Tankard at Kitchener, Ontario, in 1962, throwing second stone for skip Art Burke’s young, inexperienced Charlottetown rink, the year’s provincial British Consols Trophy winners. Beating out the ever dangerous Doug Cameron for the 1964 National Brier, hosted that year by the City of Charlottetown as part of P.E.I.’s Centennial celebrations, the Art Burke foursome were once again the most youthful rink in the 11-team bonspiel, with an average age of 25. With a Mardi Gras atmosphere in place for the Island’s first major centennial event, and balmy 70 degree temperatures outside venerable Charlottetown Forum, the Burke rink was hotter than a two dollar pistol, eliminating all competition to face the legendary world champion Ernie Richardson rink from Saskatchewan. The wheel of Fortune would deny the Art Burke foursome victory at the 35th Brier, as the Richardson posted a big four in the 8th end before the hushed yet highly partisan crowd of two thousand at the forum, yet it was Wes Richardson who was lavish in his praise of Island second stone Bobby Dillon, calling him the exceptional curler of the day, and perhaps the tournament.

One of the most spectacular developments in Island curling followed close on the heels of the 1964 Brier, as skip Doug Cameron announced he was dropping two of his original rink and replacing them with two of Burke’s rink. Joining his team at lead would be Bob Dillon, who had been sensational in only his second national tournament while his new mate would be Allen Smith. Bob’s brother George, a future Curling Hall of Fame inductee, would be moved to second stone. Cameron himself rated as one of Canada’s better curlers, was forthright in his designs, a Brier Tankard for P.E.I. At the 1965 tournament of Champions played at Maple Leaf Gardens, an eight-team CBC cash bonspiel featuring the best teams in the world, the underdog Cameron rink, sentimental favorites of the crowd , would play well, losing 6-3 to Hec Gervais’ Alberta rink in the finals. 1965 British consols winners, Bobby and the Cameron crew headed to the national Briers held that year in Saskatoon, but had to settle for a seventh place finish.

With Allen Smith at skip , Bob’s 1968 Kelowna Brier appearance produced a third place finish against winner Ron Northcott’s Alberta rink, the Island’s best ever performance at the national championship. In 1969, at the Oshawa Brie, again with Smith at skip, Dillon and the Island crew would finish in third place behind the Northcott rink. At the 1973 Edmonton Brier, this time featuring Bob Dillon at skip, Merrill Wiggington lead, John Fortier second, and Doug Cameron at third, the Island crew finished in a second place traffic jam behind winner Harvey Mazinke’s Saskatchewan rink.  Finally Bob would skip his final Brier, the 1974 London, Ontario tournament, with Fortier mate, Wiggington lead, and Jerry Muzika at second, a competition eventually won by Alberta’s Gervais Rink.

A champion curler in junior men’s, mixed, and senior action, Bob Dillon would also serve on the executive of the Charlottetown Curling Club, where he has been a member since the late 1950’s. Bob would receive the country’s highest individual curling honour, induction into the Curling Hall of Fame of Canada, on March 6, 1974. Bob’s wife Cathy, by times a curling partner on mixed foursomes, would herself be inducted into the National Curling Hall of Fame.

Admired and respected by the curling world, his exceptional talent and tactical ability in the sport always mirrored by the grace and sportsmanship he has brought to the game. Robert Francis “”Bobby”” Dillon is a most honoured inductee to the Prince Edward Island Sports Hall of Fame.”

In November 2007, Bob was inducted into the newly-formed PEI Curling Hall of Fame.