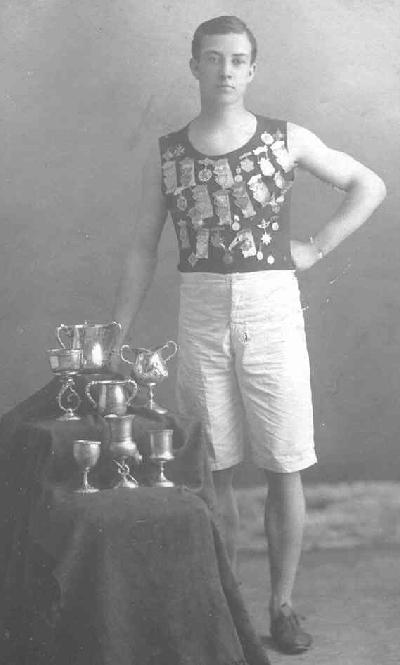 Dr. Robert “Bob” Donahoe was born in Roseneath, Kings County in 1881 and gained renown as an outstanding track and field performer, locally, nationally and internationally. As a member of the Abegweit Track Club from 1900 to 1906, he was the leader in the 100 yard, 220 yard, and 440 yard dashes, the high jump, the long jump, the broad jump, the 120 yard hurdles, the pole vault and the hammer throw. Even in events that he didn’t actually win, Robert still placed well, and as a result, he was the All-Round Provincial Track and Field Champion for PEI from 1902 through 1905.

The Island’s outstanding athlete was also a force to be reckoned with in regional competition. In 1902, Donahoe equalled the Maritime record in the 100 yard dash, recording 10 seconds flat at a Labour day meet in Charlottetown. It was said that Robert had a unique strategy for leaving the blocks, and that this gave him that extra burst of speed necessary to outrun his competitors in the sprinting events. In 1904, he took three firsts, three seconds and a third in the Maritime Championships.

Robert was a noted scholar-athlete, receiving his B.A. from St. Dunstan’s before moving on to McGill University, where he graduated top of his class in medicine in 1908. While at St. Dunstan’s, Robert competed in many track and field events as well as rugby. At McGill, he won the all-around medal at the school’s Athletic Meet for four consecutive years, from 1903 through to 1907. He was a strong performer in the sports of football and hockey, in addition to track and field, and so received a letter “M” for athletic excellence from McGill in 1906. In this same year, he was a winner at the Canadian Intercollegiate Championships, a feat which brought him international attention as one of the most outstanding student-athletes competing on the North American College circuit. Even today, Robert’s athletic record is still talked about – and envied – by many McGill students.

After completing his degree, Dr. Donahoe moved to the Prairies, placing competitive athletics aside to focus on his career as a doctor. While in Saskatoon, Saskatchewan in 1918, he passed away, a victim of the worldwide influenza epidemic, and was buried in Cardigan, PEI. As another outstanding Prince Edward Islander who made his mark in sports many years ago, Dr. Robert Donahoe’s memory lives on through his posthumous induction into the PEI Sports Hall of Fame.