View All Inductees
Maurice "Mousie" Dowling - Golf
Inducted on May 31, 1981 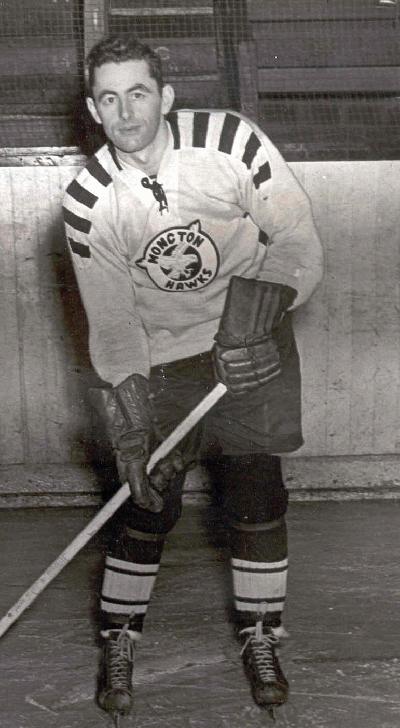 Maurice J. “Mousie” Dowling was born May 2, 1919, in Charlottetown P.E.I. and was one of the most gifted athletes ever developed in this province.  The eldest brother in a family of gifted golfers that included Cecil “Bubby” Dowling [inducted 1974] and Bob Dowling [inducted 2000], he managed, in his lengthy sports career, to rise to prominence not only in golf, but also in hockey.  Despite the dissimilarity of these sports – one of which requires teamwork and cooperation, the other relying solely on the ability of the individual – Dowling managed to achieve greatness in both at the amateur and at the professional level.

Growing up next door to the Belvedere Golf Club, Mousie learned a lot about golf during the summers that he spent working as a caddy.  It was hockey, however, that came naturally to him.  He rose to prominence in this sport during the 1937-38 season, when he was top scorer for the Charlottetown Abbies.  The team won the Island Championship, but lost to Halifax in the Maritime finals.  He embarked on a pro career in the fall of 1938, starting with the Kansas City Greyhounds of the United States League, and finished up with Hibbing, Minnesota, of the International American League.  In 1939-40, he helped Hibbing Monarchs to the IAHL Championship.

Mousie certainly would have gone further in professional hockey had it not been for the outbreak of World War II, most of which he spent in Europe with the Canadian Army.  While serving, Dowling played some hockey with service teams.  He went to the Army Finals in England in 1943, and again in Holland in 1945.  Following the war, Dowling lined up with the Charlottetown Legion team, which included Gordon Drillon, and the team won the Maritime Intermediate Championship in the spring of 1946.

In 1946-47, Mousie had a try-out with the Montreal Royals, then joined the Moncton Hawks, and helped them to the Maritime Senior Championship.  He played on this team with “Bucko” Trainor [inducted 1983] and Sammy McMannus.  In the 1947-48 season, he trained with the New York Rangers at Lake Placid, then spent the season with their top farm club at St. Paul, Minnesota, scoring 14 goals.

The 1947-48 season had been Dowling’s best as a professional.  The Second World War had robbed him of five of his prime playing years, and although he was talented, most teams wanted younger players.  He started the next season with St. Paul, Minnesota, but moved to Tacoma, Washington, of the Pacific Coast League, then back to the Maritimes.  After getting his reinstatement as an amateur, he joined the famed Sydney Millionaires.  The “Mills” won the Maritime Senior Championship, and lost to the Toronto Marlboros in the Eastern Canada Allan Cup Final.  He played the 1949-50 season with the Saint John Beavers, who lost to the Halifax Crescents in the Maritime Senior final.

The 1950-51 season was Dowling’s last in senior hockey.  He was with the Moncton Hawks, in the first season of the resurrected Big Four, and retired at the end of this season.

Golf was other sport in which Dowling displayed a particular talent, and he dominated this game in the Maritimes, with a long list of documented championships, from 1939 until the 1960s.  His five year interruption for wartime service took its toll, as it had in hockey, but Mousie came back after the long hiatus and regained his winning touch as if nothing had happened.

Mousie Dowling’s career in golf, as an amateur and a professional was outstanding.  He played in the Canadian Amateur Championships at the age of 20, his first of 10 appearances at this National Tournament.

Dowling was a member of the New Brunswick- P.E.I. Willingdon Cup Team on eight occasions between 1939 and 1962, during the years when Island golfers had to compete with New Brunswick for a spot on the four-man team.  On many occasions, P.E.I. did not place one golfer on the two-Province team; they sometimes had one, and rarely won two of the berths.

After turning pro in 1965, he competed in 29 CPGA tournaments.  He was Maritime PGA Senior Champion seven times, from 1969 to 1976, and won the Super Senior Division on three occasions.

Maurice’s later years saw him living in Riverview, New Brunswick, where he was been a pro emeritus at Moncton Golf and Country Club for many years.  His achievements in sport have been recognized not only by his own province’s Sports Hall of Fame, but also Nova Scotia’s (as part of the Sydney Millionaire, inducted 2000) and New Brunswick’s (as a hockey player and golfer, inducted 2008).