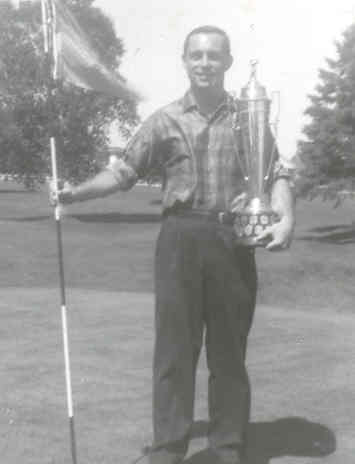 “Robert “Bob” Dowling ranks among the finest tournament golfers ever born in Prince Edward Island. Over the course of his long and distinguished career he has registered over 57 victories.

Bob was born in Charlottetown in 1938. His interest in golfing came as no surprise as his brothers  Maurice and Cecil  were already establishing themselves among the province’s top golfers. His passion for golf became evident at age nine when he joined Belvedere Golf Course as a caddy in 1947. Bob would regularly arrive at the course before daybreak to play nine holes before the Club members arrived.  Bob eventually joined Belvedere in 1952 as a junior member.

Bob has been a fine ambassador for Island golf competing  at the National Level on ten occasions. He served as a member of the first ever elite Wellington Cup Team in 1971. He was a member of the same provincial golf team in 1974, and 1975.  In recent years Bob has proven to be one of the top senior golfers on the Island serving as a member of the  provincial senior golf team from 1993 through 1999. He has won the Belvedere Club Championship on three occasions -1970,1972, and 1977. He was the low amateur in the prestigious PEI Open in 1979 and 1990.

Bob reached the quarter finals of the 1988 Canadian Mid- Amateur Championship held at Brudenell River Golf Club. This represented the highest placing of any Island golfer in a Canadian match play championship.

Many great golfers never have the good fortune of registering a hole in one. Bob has three holes in one to his credit,  the first in 1959. Remarkably the next two occurred during the same year, thirty years later in 1989.

Cecil Dowling, for many years the Head Professional at the Belvedere golf Club, stated that Bob has the smoothest golf swing ever seen among amateur golfers on PEI. He also said that Bob was great at course stroke management, which led to his steady tournament golf play throughout his impressive career.

Bob also excelled in other sports. He won the PEI Juvenile Hockey Crown with the Charlottetown Abbies and also has provincial curling championships to his credit.

In recognition of his outstanding contribution to the sport of golf we are pleased to induct Mr. Bob Dowling into the Prince Edward Island Sports Hall of Fame and Museum.”