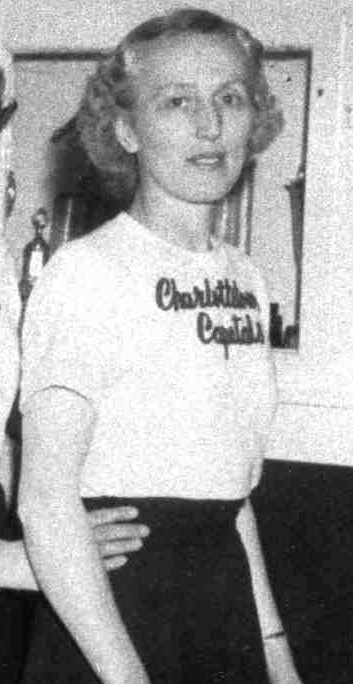 The Maritimes’ number one bowler for over half a century, it is unlikely that any Islander has dominated any sport the way that Charlottetown’s Gertie Doyle Martin did.  Both as athlete and as builder, the refrain is a familiar one: Gertie is the greatest.  Her dozens of splendid bowling trophies have long since been donated to another of her favourite causes, blind bowling, but Gertie Martin’s record in women’s bowling is strikingly evident.

In 1937, she rolled a 441 and 435, in short succession, and these scores would make Gertie Martin the undisputed record-holder for women’s bowling, highest single and highest triple, in the dominion for several years, until the inevitable perfect game was bowled by another lady years later.  Her high string mark totalled 955.

A natural athlete in several sports, Gertie credited her success in bowling to the flawless underhanded pitching technique which she derived from her years as a softball pitcher.  Among her bowling accomplishments is a 248 average over a 70-game Maritime tournament and a virtual lock on the ladies regional title for over forty years. Not infrequently, Gertie’s scores topped her male counterparts on the local lanes.

Active in City League competition until 1990, Gertie, active and radiant at 82 years young, rolled a 228 during a casual game.  Her dominance in the sport of five-pin bowling, makes Gertie Doyle Martin one of the Great Stories of Island Sports.