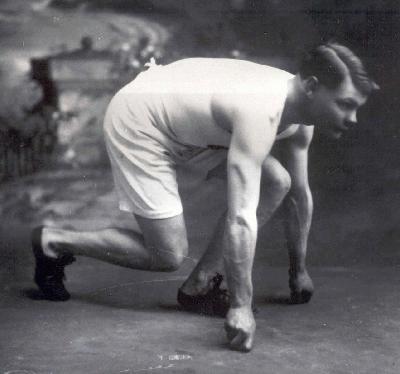 “I know of no other man actively connected in sports, who, during a long and active career built up for himself a reputation as a sportsman that entitles him to unusual prestige and prominence among the men responsible for the athletic history of the Maritime provinces in the past 20 years”.  This quote, an excerpt from the Sydney Post record of 1924, refers to none other than Samuel Francis Doyle.

Born in 1886 in Charlottetown, Sammy Doyle was a sparkling performer in track and field, football and hockey, as well as an administrator in hockey and baseball.  A graduate of St. Dunstan’s, St. Francis Xavier and Ottawa Universities, Sam Doyle was a star half-back in football and was a member of the Ottawa University team that won the Canadian Rugby Championship of 1903.

In hockey, Sam captained a St. F. X.  team that played Harvard University in Boston at the turn of the century. They lost by a score of 1-0, but had the distinction of being the first Canadian team ever to play Harvard.

Described as a natural athlete, small and wiry in stature, the late Samuel Francis Doyle was an outstanding sports participant and builder.  He passed away on December 28, 1948, and was posthumously inducted into the Prince Edward Island Sports Hall of Fame on July 3, 1977.