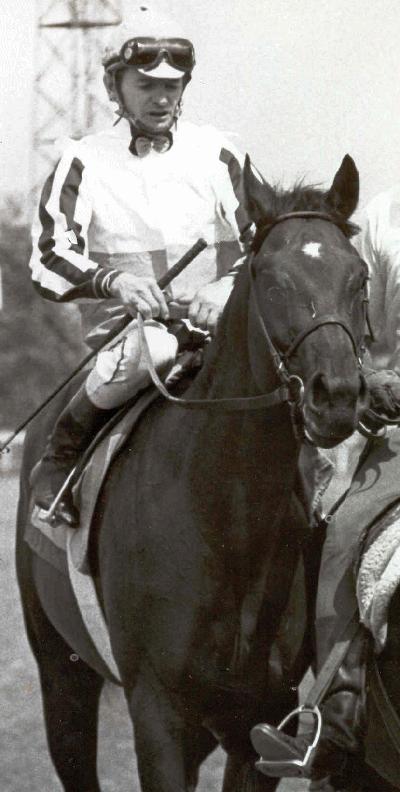 Canada has given the racing world an extraordinary number of gifted and successful jockeys, including Johnny Longden, Ron Turcotte and Sandy Hawley; however, one of the most popular and competitive of Canadian jockeys was Parkdale’s Lloyd Duffy, or “Tough Duff” as he was known on the thoroughbred circuit.  Lloyd was the 5′ 4″ jockey with the “10-pound heart.”

Born December 8, 1944 in Charlottetown, Lloyd Duffy credits a large part of his success as a jockey to the fact that his parents’ home was around the corner from the Charlottetown Driving Park.  “Sure a jockey’s size and love of horses is important, but I started my apprenticeship because I lived near the track.  I was at the track before school, after school and on weekends.  I even missed classes because of a real desire to care for horses.”  Lloyd left school in 1963 and started to work full time at the Charlottetown Driving Park for Joseph Hennessey, walking and grooming horses. Lloyd’s uncle, James “Roach” MacGregor [inducted 1986] of harness racing fame, was his first influence.  “He took me down through New England for races and it really helped a lot.  People began to say I was small enough to be a jockey, so when I finally got to the thoroughbreds, I knew a little about horses from time spent with the standardbreds.”

Lloyd started with the runners in September 1965 on the Ontario circuit, working up the hard way through the ranks: exercising and hot-walking the horses, and finally galloping them.  He shifted around, working with different owners and trainers, until, in July 1966, he was granted his jockey licence and rode in his first races.  Lloyd remembers that “I always felt I would make it, but when I started everybody told me I wouldn’t.  I was never with any big stable, never had any good horses, so I was always finishing last. But I kept learning by watching other riders and watching a lot of films.”  Duffy would not win a race until almost a year later, on June 29, 1967, riding a horse called Full Force.  By the fall of 1968 at Woodbine, Lloyd Duffy would lead all apprentice jockeys, including Sandy Hawley, in wins, earning his new nickname “Longshot Duffy” for his success on apparently outclassed horses.  Over the next thirteen years, Duffy’s reputation developed consistently.  He was also among the riders in the Queen’s Plate, the oldest and richest race in Canada, each of those thirteen years.  Frost King and Deputy Minister, Lloyd’s most successful horses over the 1981 season, achieved their own special distinctions: Frost King was voted a Sovereign Award as Canada’s Champion Three-Year-Old Male, while Deputy Minister, ridden in six of nine races by Lloyd, was named as Canadian and North America Outstanding Two-Year-Old Colt.

Lloyd Duffy’s record at the end of the 1981 season included 1551 winners, ranking him second only to Robin Platts among active Ontario riders in total wins.  In addition, Lloyd has been up on 1699 seconds and 1730 thirds over a career which saw him associated with such fine horses as Fire ‘N Desire, Police Car, Pro Counsel, Top Call, Rash Move, Par Excellence and Norcliffe.  It would be such horses as The Gray and The Bay, Frost King and Deputy Minister who would make Lloyd’s 1981 season his brightest ever, raising his total career earnings over the nine million dollar mark, equalling the success story of another Hall of Fame horseman, Alberton’s Joe O’Brien [inducted 1968].

Lloyd Duffy is also remarkable as perhaps the only jockey in North America who is licensed to drive both thoroughbred and harness horses.  “It’s always nice to know you’ve got something to fall back on if you ever need it.  Lots of harness drivers are active in their sixties but a jock couldn’t do it.  In addition, you get to sit on a sulky.”

Duffy was inducted into the Prince Edward Island Sports Hall of Fame on June 13, 1982. He was also honoured in 1990, when he was the recipient of the annual Avelino Gomez Memorial Award recognizing a jockey who has made significant contributions to the sport in Canada.

Lloyd Duffy retired from horse racing in the early nineties, after 30 years as a jockey.  He did emerge from retirement on one occasion, to perform as a celebrity guest jockey in a “man-vs-horse” charity race against sprinter Ben Johnson, which took place on October 17, 1998 at the racetrack in Charlottetown.

Although no longer an active jockey himself, Lloyd Duffy continues to work in the horse racing industry.  Presently, he lives outside of Toronto, and exercises horses for various stables at Woodbine Racetrack.