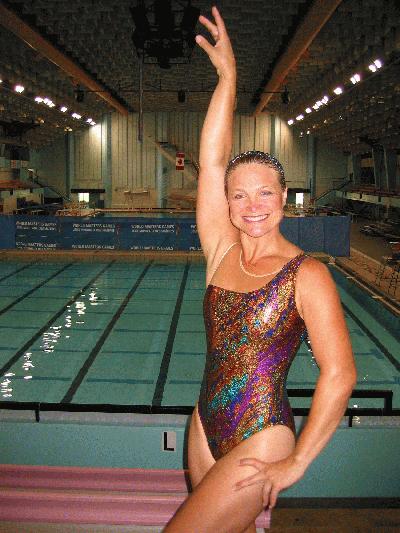 Carol Moore of Summerside is the first and only Island athlete to represent Canada in sport of synchronized swimming.

Carol began her competitive career in 1969 at the age of nine under the watchful eye of her mother and coach Hilda Moore.
She experienced her first advanced competition in 1971 when she was chosen to represent Prince Edward Island at the Canada Winter Games shortly after her 10th birthday.

In 1976 she represented the Island at the Junior Nationals in Quebec placing 6th in solo, becoming the first maritime swimmer to ever reach the finals at the National level.

In 1977 she was chosen as Sport PEI’s junior female athlete of the year.

From 1977 to 1979 Carol won the senior solo events in provincial and atlantic competition, and also competed for team PEI at the 1979 Canada Games in Brandon Manitoba.

In 1978 Carol enrolled at Acadia Univesity where she performed with the varsity team and as a soloist.

Carol’s desire to continue to develop as a synchronized swimmer saw her move to Calgary in 1980 to train with the highly recognized Calgary Aquabelles with hopes of a tryout for Canada’s National Team. Her efforts proved successful as she qualified for the National Team in 1980-81 and 82. She won gold with the team in St. Moritz, Switzerland, and in Mallorca, Spain. Carol retired from amateur competition in 1983 upon her graduation from the University of Calgary.

Upon her retirement Carol became actively involved in coaching, earning the Canadian Junior Coach of the Year Award in 1987.

While coaching in 1990 she returned to competition in the Masters category. Carol entered the Fina Master’s World Championships in Montreal in 1994, winning the solo routine. At the 1996 World Master’s competition in Sheffield, England she won the Figures, solo and duet competitions and was named Master’s Athlete of the Year. She added three additional gold medals at the 1998 Games and four gold medals in 2000. At the World Masters in new Zealand in 2002, and in Italy in 2004, Carol again won gold, in the solo, duet and team events. She was a three-time gold medalist also at the World Masters Games in Edmonton in 2005.

Carol resides in Calgary where she continues to coach and compete in Masters events. In 2007 Carol was inducted into the International Masters Swimming Hall of Fame in recognition of her outstanding performances at the FINA Masters World Championships.