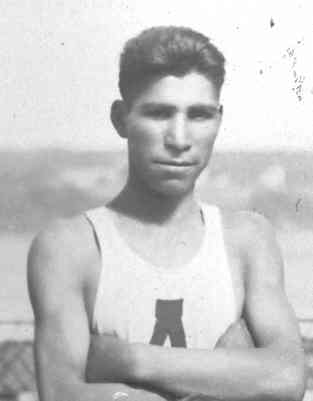 Like many young Canadians, and several of our province’s Hall of Fame athletes, Barnaby Peter Francis’ involvement in sport was interrupted and delayed by the First World War. Born September 22, 1898 on Lennox Island, Barney Francis took part in his first competitive race while stationed in France as a member of the Canadian Army during the war. In one of the Corps sports competitions, he would run against the legendary Tom Longboat, the aboriginal man from Ontario who was known as the “World’s Greatest Marathoner” in the early years of the century. It was this race that prompted Longboat to encourage the young Mi’kmaq to continue his own running career after the war.

On his return to Canada in 1919, Barney began running with his brother Jimmy. Competition and meets were poorly organized during this period, and it was 1922 before Barney established himself as a middle distance runner, winning the half mile event and establishing a new track record for the distance at the Labour Day meet in Charlottetown. Following this strong showing, Barney joined the Abegweit Track and Field Club and helped the team win the Maritime Championship at Halifax on September 9, 1922, with a time of 4:34 in the mile race.

In the next two seasons, 1923 and 1924, Barney continued to achieve great athletic success with the Abbies. July 1, 1923, at the Confederation Jubilee Celebrations in Summerside, Francis won the 220, 440 and 880 yard events. On July 6, 1923, he was awarded the Best All-Around Athlete at the Tignish sports meet. Barney was named outstanding Athlete at the Caledonian Games held in Charlottetown on August 22, 1923, despite competition that included such Hall of Fame heroes as Phil MacDonald [inducted 1969], and Elliot MacGuigan [inducted 1972]. At the Maritime Amateur Championships held that same month, also in Charlottetown, Barney would lead the Abbies to a team victory with the Maritime Championship runs in the half mile and the mile events.

The highlight of Barney’s meteoric rise to running excellence unfolded at the Canadian Track and Field Championship held in Halifax in September 1923. In the upset of the meet, Barney Francis would win the Canadian Championship of the one mile race and establish a new Maritime record for the distance. His time of 4:32 1/5 bettered the old record, which had held up for fifteen years. “Big Jim” Pendergast [inducted 1970] and Bill Halpenny [inducted 1972] were the only Islanders to have achieved Canadian or World Championships before this victory by Barney Francis.

The new Canadian Mile Champion was invited, along with MacDonald and MacGuigan, to the Olympic training camp in Rothesay, New Brunswick, in preparation for the 1924 Paris Olympics. These were perhaps the most remarkable Olympic Games ever held, and were featured in the award-winning film “Chariots of Fire.” Barney’s training was conducted by Johnny Dee, whose program included a substantial amount of road work. Barney Francis, who had been working on the lumber drive on the Miramichi River until being notified of his selection for the Olympic Squad, was ill at ease with the collegiate coach, Johnny Dee. The outcome was personally tragic: Barney sprained his ankle on a stone and would be defeated in the 1500 meter event at the Montreal Olympic Trials by the very man he had bested at the Canadian Championships of 1923. In a subsequent press interview, the Canadian track and field coach, Captain J.R. Cornelius would publicly rebuke Johnny Dee’s handling of Barney Francis.

Francis was a “natural” athlete, and had superior coaching techniques been available to him, he would no doubt have been Canada’s representative at the 1924 Paris Olympic Games. This Maritime record holder and Canadian Mile Champion was an inspiration to all Islanders, bringing honour to our province in an era when runners were as popular as the hockey players of today.

On June 13, 1982, Barney Francis was inducted into the Prince Edward Island Sports Hall of Fame. He passed away while living in Boston on August 20, 1990, at the age of 93, and his remains now rest in his native Lennox Island.