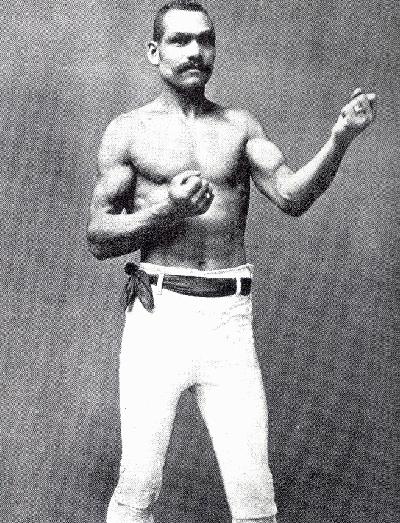 All but forgotten today, George Godfrey was the reigning “Black Boxing Champion of America” a century ago.  In an era when law prohibited mixed athletic competition, white boxers routinely “drew the colour line” against their Negro counterparts.  And so it was that the most famous boxer of them all, “The Boston Strong Boy” John L. Sullivan would refuse to trade punches with arguably the finest black fighter of his day.

Born in Charlottetown, P.E.I. on March 20, 1853, George Godfrey would leave the Island as a young man, to find employment as a porter in Boston’s bustling silk importing offices.  Joining the boxing classes at Professor Bailey’s Hub City gym, George would be nearly thirty when he made his pro debut at Harry Hill’s notorious music hall, clearly out-punching the veteran Professor Hadley in their six-round draw.  Godfrey’s powerful right hand deftly kayoed a string of lesser opponents, prompting Godfrey to style himself as the coloured champion of America.

A historic contest between Godfrey and the legendary John L. Sullivan was forestalled when police entered the Bailey Gym in September 1881, separating the two boxers who had already stripped for action.  Later attempts to match the two boxers were unsuccessful, as Sullivan went on to win the bare-knuckle title from Paddy Ryan in 1882, and was reluctant to risk losing the heavyweight crown to his Black opponent.

George Godfrey, at a fighting weight of 175 pounds on a 5′ 10 ½” frame, would be considered only a light-heavyweight by today’s standards.  Godfrey engaged in an estimated 100 bouts, many with boxers, both black and white, who outweighed him by up to twenty pounds.  His defeat at the hands of Australia’s legendary black champion, the 195-pound Peter Jackson, for the World Coloured Championship would take place August 24, 1888, at San Francisco, after a gruelling 19 rounds.  “So long as I had to be beaten,” Godfrey remarked to a San Francisco reporter the next day, “I’m glad I was beaten by the best man in the world.”  And no less than James J. Corbett, Jim Jeffries and Tom Sharkey – champions all – would go on to claim that Peter Jackson, boxing’s “Black Prince,” was the greatest fighter they had ever witnessed.

Among Godfrey’s most notable ring victories are those over Peter Maher, Denver Ed Smith, McHenry Johnson, Irish Joe Lannon, Patsy Cardiff, Steve O’Donnell and Joe Doherty.  Among his hard-fought ring defeats to other all-time boxing greats should be mentioned his knockout in the 44th round by the mighty Jake Kilrain.

Godfrey was 40 years of age when he stepped into the ring with Joe Choynski, regarded as the finest Jewish boxer in history, and fifteen years younger than Godfrey.  Age had finally caught up with him, and Choynski’s superlative boxing skills and punching power were too much for the grand old man of the ring.  After his 1895 victory over Billy Woods in Baltimore, George retired from active competition.  He began conducting a successful boxing school out of Boston, which produced several champions.  As late as 1899, Godfrey would tour Prince Edward Island in the company of Big Dan O’Keefe of Campbellton, P.E.I., to the delight of thousands of spectators.

A shrewd businessman and happily married father of six, George would pass away from tuberculosis at his Revere, Massachusetts home on October 18, 1901, aged only 48.  Characteristic of his courage in the boxing ring, when he was told he had only a few hours to live, Godfrey asked to be moved out of his bed, to stand once more on his own two feet.  With one mighty effort he stood proudly erect, only to fall back onto the bed, unconscious.  He would die a moment later.