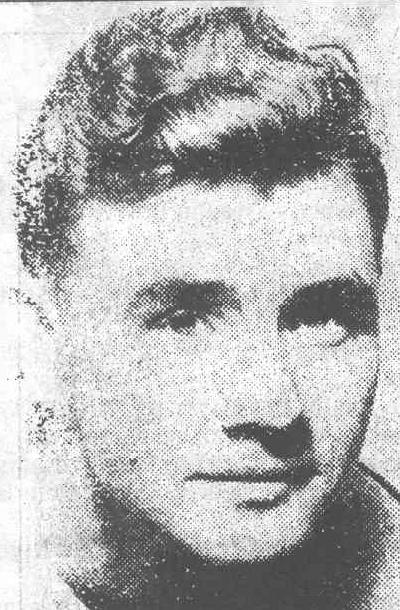 “Vincent Grant earned a reputation as one of the finest Maritime collegiate athletes of the late 1930’s and early 1940’s excelling in hockey, rugby and track and field.”

Born in Montague in 1918, Vince excelled in a variety of sports. Before beginning his outstanding collegiate career he starred with the Charlottetown Junior Abbies in 1937 and 1938. In 1938 he helped the Abbies to the Island Championships, eventually losing to Halifax in the Maritime Championships. Upon his return to the Island he was asked to join the Senior Abbies who were battling the Summerside Crystals for the Island Title. The Summerside squad featured former professionals Charlie Cahill and Windy Steele.

During those years of Junior Hockey Grant was attending Prince of Wales College. While playing with PWC in 1938 he was the outstanding player in their victory over St. Dunstan’s in the Wellner Cup awarded to the Island Intercollegiate Champions.

In 1939 Vince joined St. Dunstan’s leading them to their first New Brunswick – P.E.I Intercollegiate Hockey Championship. Grant was team captain of the squad, considered to be one of the best in the history of St. Dunstan’s. Vince’s studies led him to St. Francis Xavier University in 1940 where he continued his outstanding hockey career. He led St. F.X. to the N.S championship scoring eight points in the final game of the series. The team went on to win the Maritime Championship over U.N.B. He was named team captain in 1942, his final year with St. F.X.

Vincent Grant was also an outstanding rugby player during his collegiate career. Recognized for his exceptional speed, he competed as a star forward with St. Dunstan’s in 1938-39. During Grant’s first season at St. F.X. his playing time was limited due to an appendectomy. The following year he returned to the rugby team helping them to the Maritime title in 1941. Grant scored in every game during that season earning him the coveted “”X”” for his achievements. The 1941 squad is often referred to as the greatest in the history of St. F.X rugby.

Grant’s achievements also extended to track and field. At their annual field day in 1938 he was St. Dunstan’s best all round athlete winning the 100,220, and 440 yard dashes and placing among the top three in four other events. The following year he achieved similar results setting records in the 220 and 440 yard dashes.. At St. F.X. Vince was the top track and field athlete in 1942 winning the 100 and 220 yard dashes and the high jump. This performance earned him his third school letter.

After leaving St. F.X, he suspended his athletic career to serve in the Canadian Army Dental Corps and to continue his studies at McGill University.

He returned to the Island in 1948, opening up his dental practice in Summerside. During that period Grant played senior hockey with Windy Steele’s Dodgers.

Tremendous natural ability combined with an intense competitiveness and will to succeed established Vincent Grant as one of the greatest collegiate athletes of his era. In recognition of his outstanding career as an all-round athlete, the Prince Edward Island Sports Hall of Fame and Museum is pleased to induct Dr. Vincent Grant.