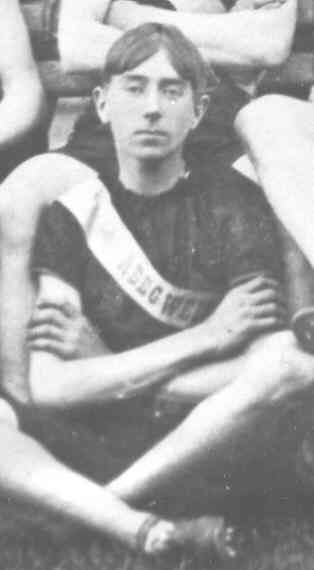 In an era when Island athletes ranked among the best in Canada, Harry Harley established himself as one of this province’s most capable and enduring track and field performers, representing Prince Edward Island at both the regional and national levels with distinction for over twenty-five years.

Harry Harley was born October 22, 1886 at Day’s Corner, Prince County. By age sixteen, he had competed in his first major competition, the 1903 Labour Day Track and Field Meet held in Charlottetown. Here, he gained second place in both the pole vault and the mile run.

The next summer, Harry joined the Abegweit Track and Field team, comprising such athletes as Bill Halpenny [inducted 1970], Toby MacMillan [inducted 1981], Bob Donahoe [inducted 1977] and Walter Jones [inducted 1986]. Founded in 1884, this was perhaps the most effective amateur association ever formed in Canada. In 1904, the year of Harry Harley’s entry onto the Abbies, the Charlottetown-based squad were destined to dominate that year’s Maritime championship held in Halifax. From this auspicious beginning, Harry went on to compete in hundreds of track and field events. His career extended into the early 1930s, when he performed as part of the Charlottetown’s famed Fire Department Hose-and-Reel Team.

Harry Harley’s career accomplishments include provincial championships in track and field events on at least fifteen occasions. Provincial champion in the pole vault several times between 1905 and 1920, Harry would also win the Maritime Championships in this event in 1906, 1908 and 1909. His standard of performance was highly competitive with the best vaulters in the nation. Bill Halpenny, a future Sports Hall of Famer, at this time held the Maritime record at 11′ 3″; Harley consistently vaulted over 10′ 6″, and on occasion cleared the eleven-foot mark.

On the track, Harry Harley rated among the region’s strongest middle and long distance runners, winning three Maritime Championships in the half-mile event, and capturing another three Provincial Championships in the mile run. In the 880-yard distance, Harry Harley’s best time was a remarkable two minutes and four seconds, exceptional in an era lacking either professional equipment or coaching techniques. Among his most memorable performances was the 880-yard run that took place at the 1906 Firemen’s Tournament, when he defeated the brilliant runner Bauld from Sydney, Nova Scotia.

At the five and ten mile distances, it would be the tireless Harry Harley who offered Michael Thomas [inducted 1980], the greatest distance runner to come from this province, with his stiffest competition. The Patriot Marathon Ten Mile Road Race of 1909 provides a classic example of this, when Harley battled with Mick Thomas and George Dawson of Westville, Nova Scotia before the thousands of Island spectators who lined the route. Such thrilling races were commonplace in the golden era of distance running on Prince Edward Island.

Although a spectacular individual competitor, Harry Harley did not focus solely on individual glory, and was known to “set the pace” in some races so that one of his Abegweit or Victoria teammates might achieve a record-setting mark. Throughout his lengthy career in athletics, it was characteristically unselfish habits such as this that set him apart as one of Island sport’s most inspiring examples. That legacy, as much as any of his own record-setting performances, is the imprint of Harry Harley that remains on our province’s athletic heritage. That he understood the real meaning of the competitive ideal is revealed in the words that he one day imparted to his grandson: “Stick with sport, my boy, and you’ll never go wrong.”

Harry Harley passed away in Charlottetown on June 12, 1964. He was posthumously inducted into to the Prince Edward Island Sports Hall of Fame in 1984.