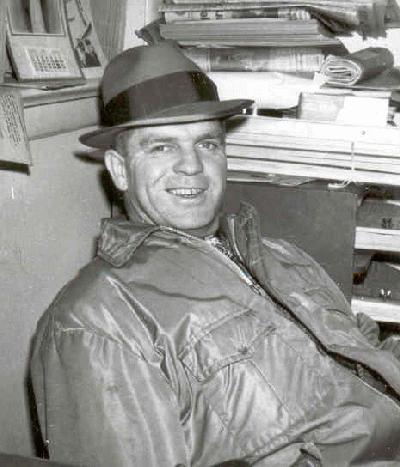 Born in Summerside, on July 7, 1920, Joseph Charles Hogan would take a keen interest in sports, and while at Summerside High School he would be a flashy winger in hockey, a dashing runner in football, and a catcher and fielder in baseball. As sports scribe John McNeill [inducted 1992] observed in 1953, “if war had not broken out and Charlie had gone to Saint Dunstan’s University as he intended in 1939, he would have hit bigger headlines in football than either hockey or baseball.

Enlisting in the Canadian Army, Charlie Hogan rose to the rank of Sergeant and, while fighting in the Italian Campaign in 1944, he suffered the loss of his right arm. As devastating as such an injury would be to a promising athlete, Charlie was buoyed by such wartime chums as Gerard “Joe” Bernard [inducted 1976], Joe Deighan and of course his brother Jim [inducted 1990], to get right back into the thick of the games upon returning to Summerside at war’s end in 1945.

Despite frequent hospitalization for his wounds, Charlie would immediately take up coaching and building up the nucleus of his first Maritime finalist team, the Summerside Midgets, the town’s first ever minor hockey squad. The 1945-46 edition of this team would win the Maritime Juvenile Hockey Championship, and become the first
Summerside team to win a Maritime hockey crown since 1914.

Turning to baseball, Charlie’s Summerside All-Stars were 1947 finalists, capturing the Maritime Intermediate Baseball title the next year, 1948. The Charlie Hogan legend of astounding victories in the face of overwhelming odds had begun. When Jack Curran, Summerside Contractor, took over the sponsorship of the team the following season, replete with flashy uniforms and a fine new ballfield, they would again capture the Maritime baseball crown for 1949, repeating in 1950. Charlie also coached a junior Curran and Briggs squad to the 1950 Maritime baseball finals, and they were triumphant over the heavily-favored Saint John team. This is perhaps an unequaled
record in Canadian sport, for Charlie had managed to win two Maritime championships in the space of only a few weeks. In total, he had led Intermediate teams to the
Maritime finals for five consecutive years (1947-1951), winning three championships, plus the Junior crown in 1950.

Charlie Hogan’s career as a coach concluded in 1951, when he moved on to an administrative career, serving first as rink manager and, in later years, Summerside’s Recreation Director for over 15 years. His creative genius for promoting sports events and his organizational abilities characterized his fifty year association with Island sport. Most notably, it was Charlie Hogan who would conceive the idea of establishing the Prince Edward Island Sports Hall of Fame in 1968.

An outstanding civic and Legion leader, Charlie Hogan would be named Summerside’s Citizen of the Year in 1967 and 1973, receiving many local and national awards before
his untimely death in 1994.

Athlete, coach, builder of sport, he had the vision to create a sports hall of fame where there was none, and that vision of the late Joseph Charles Hogan was honored when he was posthumously inducted into the Prince Edward Island Sports Hall of Fame.