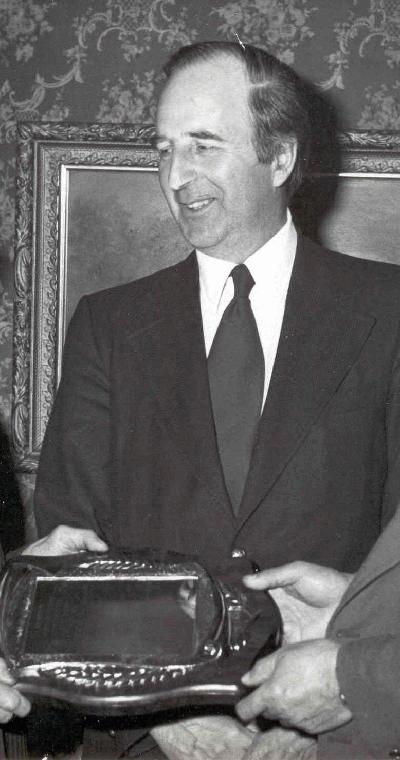 James T. ” Jim” Hogan was a man of action and sincerity. For over five decades, he was a major part of the social fabric of Prince Edward Island. His legacy of guidance and leadership influenced the direction of sport and community in the province throughout the years.

Born September 18, 1918, Jim was educated at the local public school in Summerside and at St. Dunstan’s High School. At the outbreak of World War II, he enlisted with 8th Heavy Anti-Aircraft Battery. During his 5 years of service overseas, he received a number of military awards including the France and Germany Star, the Defence of Britain War Medal, the Canadian Volunteer Service Medal and the Confederation Medal.

Returning to Prince Edward Island after the war, Jim became very involved in sports, the Royal Canadian Legion and community activities – all at the same time. As a youth Jim, had been an active participant in sports. He had played hockey in Summerside and had been a member of the St. Dunstan’s Junior and Senior teams. While stationed in Canada prior to active duty, he had played for the Camp Petawawa Grenades, senior hockey champs of Ontario, and quarter-finalists on the Allan Cup trail. He had continued to play hockey with the Canadian Army Team during his service overseas. Upon his return home, however, he became more interested in the organizational aspects of sports, and developed and implemented an extensive organised sports program for the youth of Prince Edward Island. Because of his success in organizing these activities, he was named the first Physical Fitness Supervisor for Prince County by the provincial government.

Early in his life, Jim showed a special ability to relate to youth. Through his coaching and organizational skills, he taught several generations of Islanders the ethics, values and decision-making abilities that are the essential elements of athletic competition. In 1947, he reorganized the Summerside Athletic Association and served as its President for eight years. Also in 1947, he coached the Summerside High School rugby team to the Provincial Interscholastic Championship. During the fifties, Jim formed and supervised the first full minor hockey and minor baseball programs in Summerside. He also found the time to coach various Kinsmen midget teams to provincial titles, and to the 1950 Maritime Hockey Championship. In the 1960s, he enjoyed success as a coach of rugby, hockey and baseball. He was also was chairman of the very first Eastern Canadian Age Class Track and Field Championships held in Summerside in 1964, in which 500 athletes participated. In 1973, he was program chairman and master of ceremonies of the first Provincial Summer Games. Lest it be thought that his talents were not fully rounded, Jim displayed his artistic nature in his encouragement and support of the Royal Canadian Legion’s regional and national award-winning concert band.

His unique personal touch was evident at the many sports, celebrity, and testimonial dinners he organized over the years, the profits of which went to support youth programs. He was also the founding chairman of the committee that established the Charlie Ryan Monument and the Charlie Ryan Scholarship in honour of his great friend. In March 1995, Jim was, rather appropriately, the recipient of the Charlie Ryan Award from the Hillsborough Rotary Club for this work with youth.

For more than fifteen years, Jim Hogan chaired the Prince Edward Island Sports Hall of Fame, nurturing the organization from its early days until it reached the high esteem in which it is held today. In the enthusiasm and energy he devoted to the Hall, Jim served as an example to young athletes in the province, underlining the importance of sports as a builder of character, along with the importance of documenting and remembering PEI’s rich sports heritage. His abilities as a sport participant, coach, and referee were recognized when he was inducted into the Hall of Fame on June 24, 1990.

Jim was not only an active member of his own community but was also well-known throughout the province for the countless hours he dedicated to many worthwhile projects. Shortly after World War II, it seemed only natural that he would play a major role in the Royal Canadian Legion – an organization founded on the principles of remembrance, just rights and comradeship, and pledged to assist those who have served and their dependents. From 1949 to 1983, he was the Legion’s Services Officer, responsible for assisting veterans and their dependents in applying for benefits. From 1959 to 1962, he conducted a fund raising program that enabled the construction of the Legion building in Summerside, and was also a member of the committee that raised funds to furnish the building. Unsurprisingly, Jim was chosen Legionnaire of the Year on two separate occasions. For his long and dedicated service to the organization, he was also made a Life Member and honoured with the Legion’s highest award, the Meritorious Service Award.

Jim was chairman of the Summerside Citizen of the Year Awards committee for a number of years, and in 1981, the former chairman was honoured with the Citizen of the Year Award. He was also active in other provincial fund raising committees including the Kidney Foundation, the Canadian Red Cross Society, the Salvation Army, the Addiction Foundation of Canada, the Queen Elizabeth Hospital Fund Raising Campaign, and the Queen Elizabeth Foundation, which he served as director from 1991 to 1994. In recognition of his volunteer service to the community, he was awarded the Prince Edward Island and Canadian Centennial plaques, as well as the Canada 125 medal for volunteer service in 1992.

He was a member of the Rotary Club of Charlottetown for many years, and no one exemplified the Rotary International motto of “Service Above Self” more than Jim Hogan. He served with dedication on Rotary committees such as “Polio Plus”, the objective of which was the eradication of polio from the world; the Rotary Foundation, which raises funds for international programs intended to improve living standards in developing countries; and Rotary’s annual Remembrance Day program, which has recognized and paid tribute to veterans who served in the different theatres of operations during World War II. For his outstanding work on these committees and his dedication to service above self, he was made a Paul Harris Fellow in 1991.

Additional honours laid upon Jim Hogan included the 1995 Sport PEI’s President Award, and induction into The Sports Page Club’s Wall of Fame as a builder. He was also presented with the Governor General’s Caring Canadian Award in 1998.

Sadly, James T. Hogan passed away on July 7, 1999. He was a person who devoted enough energy and enthusiasm for several lifetimes to the province of Prince Edward Island and also to youth. Jim Hogan has earned himself a place in PEI history, and, in the process, the respect and admiration of all who have come to know him.