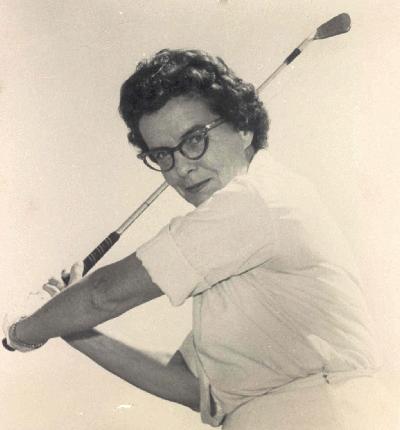 Born in Summerside on November 23, 1918, Blanche had the ability to excel at a variety of sports, whether they required stamina, strength or a fine eye. During her school years, Blanche participated in Senior Girls Hockey and was an excellent speed skater and curler. She competed in numerous provincial badminton tournaments.  She was also a member of the Summerside Crystal Sisters the year they won the Provincial Championships, but did not compete with the rest of the team against Ontario in the National Championship. Blanche took up bowling in 1940 and later won the Ladies High Single for all Federal Public servants in Prince Edward Island. In 1950 she won the Ladies High Triple for all Female Public Servants in Canada.  She was also a member of the P.E.I. Ladies Curling Association in the late 50s and early 60s.

Although the above list of athletic accomplishments is impressive, it pales in comparison to those of Blanche’s golfing career.  She won the Godkin Trophy at the Summerside Golf Club three times, the Moncton City Open Championship Trophy and Cece Peake jewelled putter in 1965, and the Harold E. Gaudet Memorial Trophy in 1972 and 1974. She competed in the Provincial Team Trials for the Nationals on four occasions, and was successful in gaining a berth on the Prince Edward Island team in 1960, 1962, 1963, and 1966.  In June 1975, Blanche tried out for the Senior Ladies Team and won the Provincial Senior Ladies title. This win led her to the Senior National Championship in Delta, British Columbia. The PEI Team had their best showing to date at this event, with sixth low gross and fourth low net. Blanche won the Provincial Senior title again in 1976 and placed first in the low net division at the Nationals in Saint John. Blanche would win one more provincial senior title in 1982, qualifying for her seventh national championship.

One of the most thrilling moments in Blanche Hogg’s golf career was when she shot a hole-in-one on the 14th hole at the Summerside Golf Club on August 10, 1964.  Other thrilling moments may include her induction into the PEI Sports Hall of Fame on July 18, 1976, and her selection as Overall Representative for Female Athletes from 1930 to 1970 at Legends All-Star Sports Bar in Summerside.

This impressive list of victories ranks Miss Blanche Hogg among the top female amateur golfers in the history of Prince Edward Island.  She continued to play golf well into her eighties, winning the Atlantic Sally Basler Mixed Open for 1994 through 1996.

A faithful attendee of the annual inductions and a great supporter of the Hall, Blanche attended the dinner for the final time in 2012 when she represented her teammates as the Crystal Sisters finally took their rightful place in the Hall of Fame.