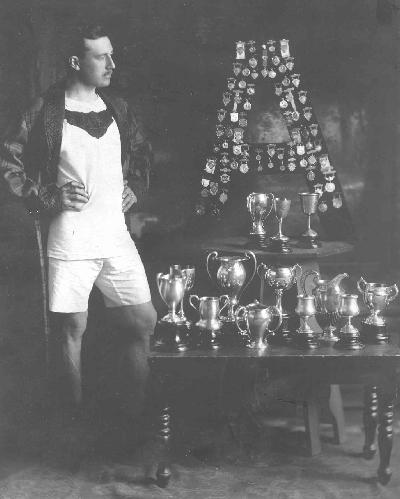 Charlottetown native Lieutenant Colonel J. Parker Hooper was renowned for his prowess in many areas of sport. He excelled at rugby, played hockey with the 4th Artillery Regiment during World War I, and owned and raced horses on P.E.I., but his most remarkable accomplishments came in track and field. It was said that no one in the Maritimes had more powerful drive or greater speed than J. Parker Hooper. He thrilled spectators with his efforts every time out.

With no coaching and very little training, Hooper competed in the Maritime Track and Field Championship at Halifax in 1913. The Island athlete was expected to have a modest showing at best, but surprised and thrilled spectators when he set three records that remained unchallenged for many years, and tied another. He won the broad jump with a new Maritime record of 22 feet, won the 220 yard dash for a second record, won the 1/4 mile in another record time, and equalled the 100 yard dash record of 10 seconds. Due to his outstanding overall performance, he was named the Amateur Champion of the Maritime Provinces.