Jared Connaughton to be inducted into Hall of Fame
June 20, 2022

New Haven’s Jared Connaughton, one of PEI’s most successful athletes of recent times, will join the PEI Sports Hall of Fame in an induction ceremony on Tuesday June 28.
The reception will be held at 12:30pm at the Rodd Royalty in Charlottetown. The event is open to friends, family and acquaintances, but attendance must be confirmed no later than Friday June 24 by contacting Nick Murray of the PEI Sports Hall of Fame, at 902-393-5474 or njmurray100@gmail.com.
Connaughton, who represented Canada at the 2008 Beijing, and 2012 London Olympic Games, was also a national champion at 200m, and a double gold medal winner in 100m and 200m at the 2005 Canada Games in Regina. He also enjoyed an outstanding college career at the University of Texas in Arlington.
Bluefield-student Connaughton caught everybody’s attention in the early 2000’s when his blistering speed saw him smash the provincial high school 100m and 200m records, and saw him medal at the Legion National and Track Field Championships.
It was at the 2005 Canada Games where Connaughton became a household name in the province, becoming PEI’s first ever double gold medal winner with convincing wins in the 100m and 200m, a remarkable feat considering PEI did not have a proper training facility.
By this time he was established at the University of Texas in Arlington, and he enjoyed an outstanding career at the NCAA Division 1 School, qualifying for National Championships in both indoor and outdoor events, and winning the Southland Conference track and field athlete of the year.
The college circuit honed his baton-skills, and this was to stand him in good stead as he became a regular in the Canadian 4x100m team for almost 10 years, competing at all of the major championships, including the Worlds on three occasions.
In 2008 Connaughton became national champion in 200m, and that year saw him compete at the Olympics in Beijing, qualifying for the 200m semi-final and helping Canada finish 6th in the 4x100m relay.
In 2012, Connaughton again made the Olympic team, running the 200m but enduring crushing disappointment in the relay when a lane violation cost Canada a bronze medal. The way Connaughton handled the error earned him the respect of sports fans across the country, and cemented his legacy of not just being an outstanding athlete, but a true sportsman whose humility and grace brought pride to his home province.
Connaughton retired in 2014 with a legacy of competing at two Olympic Games, three World Championships, a Commonwealth Games, a Pan-American Games (silver medalist), and a record of 19 medals at various Canadian Championships. He currently resides in Texas with his wife Tamesha and two children.
The PEI Sports Hall of Fame will be holding a number of induction ceremonies in 2022 as it looks once again to honour those athletes, teams and builders who have excelled in sport in the province. For more information on the PEI Sports Hall of Fame please visit www.peisportshalloffame.ca
-30- 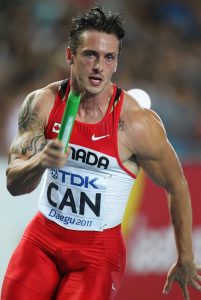