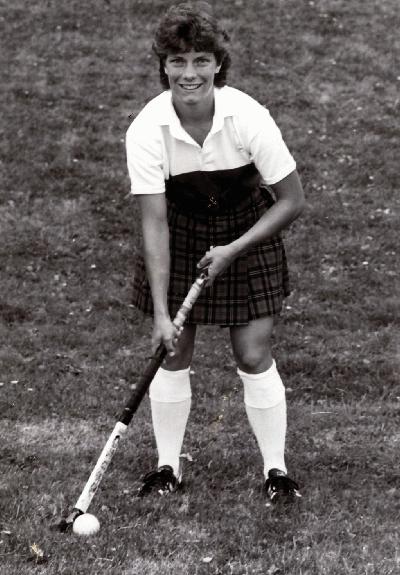 Hard-work, dedication, selflessness, ability, leadership, strength – those are all words that were used to describe Kathryn in the numerous letters of support received while putting together her nomination into the Hall of Fame. They are all worthy and admirable traits, and they apply not just to her field hockey career, but the way she has lived her life, both as a wife and mother to five wonderful children.

Born in 1963, Kathryn’s athletic ability was evident to all as she grew up. A Bedeque girl, Kathryn was Athlete of the Year at both Athena, and then Three Oaks, excelling in her chosen sport – field hockey.

In the late 1970s and early 1980s field hockey certainly was a popular sport in the province. Thanks to the efforts of people like Barb Carmichael, Donna Phillips and others, PEI teams enjoyed considerable success fielding strong teams at the provincial level, including a 4th place at the Seniors in 1983. Kathryn, a centre halfback, was a key component of all of those teams. Her infectious enthusiasm, incredible work-rate and outstanding ability always brought out the best in her team-mates.

On graduating high school in 1981, Kathryn went to U.N.B., probably the finest field hockey team in the Maritimes, and it was there her career really took off.

Under the guidance of coach Joyce Slipp, Kathryn enjoyed a tremendous varsity career. Between 1983-1985 she was MVP for the Red Sticks, during which time she was also a three-time AUAA all-star. She won three merit awards for athletic and academic achievement, was a three-time tournament all-star at the Canadian University national championships, and was a CIAU all-Canadian in 1985, the same year she helped the Red Sticks win a national silver medal. Twice she was UNB Female Athlete of the Year.

In addition, she was an all-Canadian in indoor field hockey, and as part of the Atlantic Indoor Team, she won three consecutive indoor national titles.

It was an incredible varsity career for Kathryn, and her outstanding performances brought her to the attention of the national team – in truth, they could hardly ignore her.

When she learned that the national coaches were considering her for the team, Kathryn worked even harder to take her game to the next level.

Coach Slipp recalls that in order not only to make the team, but to become a key player, she needed additional skills. Because of her strength and power, she practiced for hours daily on shooting from penalty corners. She put in many hours to make herself indispensable , and it paid off as she later became part of the number one unit on special teams offense.

From 1982 to 1988 Kathryn became a stalwart of the national team, first as part of the juniors, and then the full senior squad. She became one of the top defenders, usually called upon to shut down the opposition’s top scorer, and her international career took her all over the world. Newspaper reports were full of Kathryn’s successes, as she competed in tournaments across the globe including the British Isles, Jamaica, Russia, Australia and Holland. In 1986 she became only the first, and still the only Islander to play at the world famous Wembley Stadium in London. In all this time on the national squad, she was often the only player east of Toronto to be selected.

In 1986 Kathryn helped Canada win bronze at the World Cup in Holland, while a year later the team again finished third, this time at the Pan-American Games. In 1988, however, Kathryn received the ultimate accolade for any athlete, when she was selected by her country to compete at the Olympic Games, in Seoul, Korea becoming at that time just the 6th Islander to achieve that honour.

At the Olympics Canada finished in a respectable 6th position, and Kathryn had the added honour of scoring one of Canada’s goals in the competition.

Following the Olympics, Kathryn wound down her playing career. It is certainly fair to say that throughout the 1980s, along with that other great Island Olympian Anna Pendergast, Kathryn was the Island’s most decorated female athlete. Along with Lorie Kane, she is the only Islander ever to win the Sport PEI Female Athlete of the Year award on three consecutive occasions, and she was twice winner of the prestigious Lieutenant Governor’s Award, emblematic of the best athlete of the year in the province.

What stands out most about Kathryn, and why she has garnered so much respect amongst all those that know her, is that she did everything the right way. Team-mates, friends and coaches talk about her leadership skills, her desire to succeed, and her amazing work-ethic. With such skills it was no surprise that she became a successful coach, joining forces once again with Donna Hornibrook to guide UNB to a gold medal at the 1989 Canada Summer Games.

With her induction,  Kathryn becomes the first athlete from field hockey to become a member of the Hall, and the 7th Olympian. It could not happen to a better person – Kathryn MacDougall Johnson: wife, mother, all-star, Olympian, and Hall of Famer.