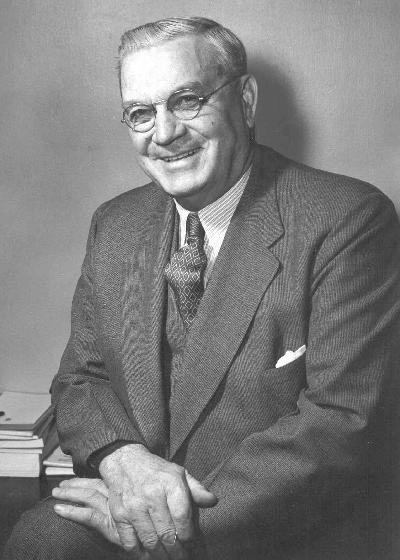 As every Islander knows, there are really two major Island activities whose outcome provides all of us with a sense of mythic fulfillment: sport and politics. And no Islander ever achieved a greater success in this two-ring circus than the Honourable John Walter Jones.

Born April 14, 1878, on the family farm at Pownal, Walter Jones was early blessed with the instinctive physical vitality that life in rural Prince Edward Island affords, learning to handle a plough from his father by age eleven.

Leaving the farmstead at seventeen, the young Jones entered Prince of Wales College in Charlottetown, where he began the first of his several outstanding careers, that of the scholar-athlete and educator. At eighteen, Walter was teaching primary school at Mount Herbert, and two years later, he was appointed principal at Winsloe School. The youthful schoolmaster would still find time to join the Abegweit Amateur Athletic Association in 1898, the already legendary multi-sport organization then in its twelfth year of existence.

Possessed of a ploughboy’s rugged physique and quiet leadership, the young Walter Jones was the natural choice as captain of the Abbies’ rugby team of 1898, then at the peak of its playing glory. And what a captain Jones became! Always a believer in conditioning, Jones put his Abby teammates through a workout routine that had every man as hard as steel. Frequently, he took the rugby squad on a walk to his home near Pownal, where they ate a hearty farm meal courtesy of his mother, after which he led the city boys in an eight-mile run back to Charlottetown.

Not surprisingly, Jones led the turn-of-the-century Abbies’ track and field teams into competition. These teams included such hall of famers as Toby MacMillan [inducted 1981], Robert Donahoe [inducted 1977], and Bill Halpenny [inducted 1970]. He quickly established himself as one of the best performers in Eastern Canada in the field events, setting Maritime records as a weight and hammer thrower.

Relinquishing his position at Winsloe, Jones entered Acadia in 1901, soon earning distinction as that university’s most promising educator. He was selected for a unique travelling scholarship which allowed him to study at Cornell, Chicago, Clark and Columbia universities, earning his degree at Acadia in 1904. While at Acadia, Jones continued his outstanding athletic career, acting as captain of both the college rugby and track and field teams. Here, he once more established a new Maritime throwing record. It was also during this time that he was offered a place on the All-Canadian Rugby Team, which toured Europe in 1902.

Returning to his native province in 1904, Walter Jones supervised the construction of the McDonald Consolidated School in Mt. Herbert, serving as its principal. This school was visited on three occasions by Earl Grey, the Governor-General of Canada, who pronounced it “the best-managed school in all Canada.”

Always anxious to improve his skills for the benefit of others, Walter Jones entered the Ontario Agricultural College in 1907, where he completed its four-year course in two years. In addition to being one of the college’s leading scholars, the young man tied for the all-round track and field championship held at the University of Toronto. His throws of 124 feet, 6 inches for the 16-pound hammer, and 36 feet, 7 ½ inches for the 16-pound shot established Canadian college records. Even two decades later, sports officials were still describing the marks set by Jones as “beyond the reach of present-day athletes.”

Following a professorship at Hampton College, Virginia, Walter Jones was given sole control over the United States Government’s largest experimental station, at Arlington, Virgina. From this influential position in the U.S., Jones was instrumental in starting the seed potato industry on P.E.I.

Returning to Canada in 1912, Jones was appointed to the government’s commission of conservation, and in the following year he published his internationally-famous book, “Fur Farming in Canada.” It was the first scientific study of the fox and fur industry, and this province’s gift to the world of agriculture.

Walter Jones began practical fox farming at his Bunbury farm in 1914, and by 1918 had established his world-class herd of Holstein Friesian cattle, which won him the King George V Medal as this province’s outstanding Master-Breeder.

Although serving on the executive of the Abegweit Club – as late as 1929 – when leadership was sorely lacking, Jones necessarily devoted himself to agriculture and social issues. His enthusiasm for sporting competition never diminished, but was instead transferred to the political arena. He first ran, unsuccessfully, for the Farmer Progressive Party in the 1921 Federal election. His successful career in provincial politics began in 1935, as representative for Belfast, winning re-election in 1939, 1943, 1947 and 1950.

Following the appointment of Hon. Thane A. Campbell to the office of Chief Justice in 1943, J. Walter Jones became the 12th premier of P.E.I. Following the general election later that October, he was elected premier with 20 seats. Appointed to the Canadian Senate in 1953, Jones had been premier for 10 years and nine days. He later died in Ottawa.

The record of achievement left us by J. Walter Jones, from his days as a good-natured scholar-athlete in the golden era of amateur sport, all the way to the most responsible office in his native province, remains a fresh and compelling inspiration to us all.