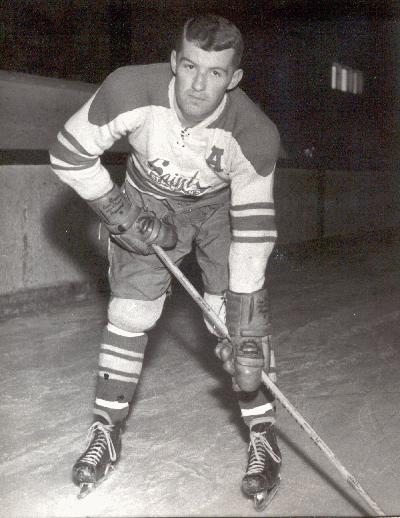 Mike Kelly’s outstanding career in the sports of hockey and baseball began in his home community of Morell. Kelly earned his first Maritime baseball title at age 12 as a member of the 1959 Morell Beavers. He continued to play minor baseball in Morell until 1963 when he joined the Charlottetown Legion Juvenile Team coached by Hall of Fame inductee Charlie Ryan. Kelly was unstoppable during his Juvenile years leading Charlottetown to the Maritime Championship in ‘63 and ‘64. Kelly was dominating both as a pitcher and a hitter, often recording 20 plus strikeouts per game while maintaining one of the teams highest batting averages. Coach Ryan was once quoted as saying ” Mike is by far the best ball player in this province”.

In 1965 Kelly moved up to the Junior ranks. With additional coaching from former major league pitcher and PEI Hall of Famer, Vern Handrahan, he led Charlottetown to another Maritime title. He competed for the Island Junior All-Stars that year at the National Championships in Manitoba. Kelly recorded one of the most memorable performances ever by an Islander at a national baseball event striking out 18 batters and allowing one hit in a disappointing 2-1 loss to the Manitoba team. His outstanding performance earned Kelly a selection to the All-Canadian Junior Team which would compete in the Junior World Series in Mexico. Kelly was undefeated in Maritime playoff competition as a Juvenile and Junior pitcher.

His outstanding Junior performance led St. Louis Cardinal Scouts to Kelly. In 1966 he signed a contract to pitch with the Cardinal’s in the Florida Rookie League. Unfortunately an injury from a sharp line drive would end Kelly’s Major League ambitions.

Upon his return to the Island Kelly dominated Island baseball for several more years, competing at the Intermediate and Senior level. He was player coach of the 1977 Islanders Baseball team that won a silver medal at the National Senior Baseball Championships.

Mike Kelly was also an outstanding hockey competitor during the 1960’s. He played minor and high school hockey in Morell before joining St. Dunstan’s University in 1963. Following an impressive rookie season, Kelly was one of the leading scorers for St. Dunstan’s as they won the Maritime Intercollegiate title in 1964-65, losing in the final of the Canadian Intercollegiate Championships. The following year Kelly set a new league record for assists while leading St. Dunstan’s to a second place finish in the Maritime league. He was awarded the Father Walter MacGuigan Memorial Award as St. Dunstan’s most outstanding athlete.

In 1967-68 Mike Kelly was team captain and the Maritime intercollegiate league’s top scorer. Kelly participated in the Canada Winter Games in Quebec finishing second in scoring. He was award the university’s most valuable player award. Following his career with St. Dunstan’s Mike became a leading scorer with Sandy’s Royal’s senior hockey team.

Mike Kelly was also a top coach, official and administrator until his untimely passing on 5 May 1997 at the age of 50. In 1999 he was posthumously awarded the Sport PEI President’s Award for outstanding contribution to sport, and in 2002 he was named to the UPEI Sports Hall Of Fame.

Always modest about his athletic accomplishments, Mike Kelly led by example. He will be remembered as one of the top all round athletes of his era.