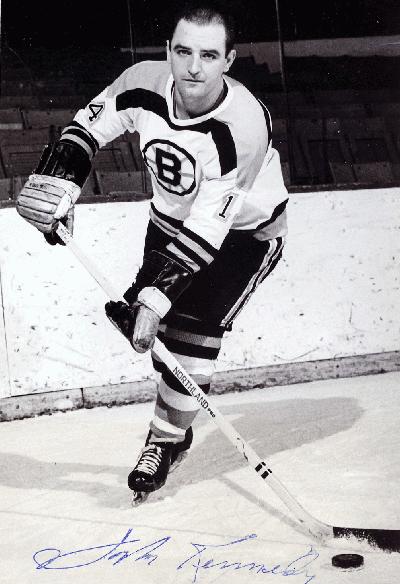 Forbes Kennedy can remember it all just like it was yesterday.

“That first game I ever played in the NHL – talk about being nervous.”

He was with Chicago and playing right wing, checking Ted Lindsay of Detroit.  “They put me over there, you don’t say anything, you just go out and play.”

It was the start of a career that would span more than 30 years.

The oldest of four children, Mr. Kennedy was born in 1935 in Dorchester, New Brunswick. Two weeks later, his parents, who were originally from P.E.I., moved back to the Island and settled in Charlottetown.

A young Forbie went to school at West Kent, playing baseball and attending the first-ever Canadian Boy Scout Jamboree in Ottawa in 1949.

“I didn’t start playing hockey until I was 11 years old, so I guess I was kind of late.  My father just put me on the ice and I started going.”

His first games were on an outdoor rink at King’s Square against teams from other city squares.

When he was 16, he headed for Barrie, Ontario, hoping to play for the Barrie Flyers, but when he got there, he discovered he had to be 18 years-old to play.  He stayed to practise with the team, and even played an exhibition game with the Montreal Junior Canadiens, but the week before Christmas he left Barrie to play junior hockey with Saint Mary’s in Halifax.

He had a good season, finished second in the scoring race and the next year made the jump back to the Junior Canadiens.

“I played with the likes of Henri Richard, Claude Provost, Eddie Johnson, Claude Laforge; all the guys who went on to play in the National Hockey League.

In his last junior year, Mr. Kennedy was traded to Chicago. He found it hard to believe at first because somehow he never really expected to become a professional hockey player.

He also says he was disappointed to leave the Canadiens’ organization, but “if they had sent me to Timbuktu, I would have gone. I believe to play hockey, you’ve got to love the game. If you don’t, it’s a job. When we played hockey, it wasn’t a job, not for one guy in the league.”

“If I would have held out, I could’ve gotten more. But I really felt I was a millionaire coming out of there with my signing money.”

After one season in Chicago, Mr. Kennedy was traded to Detroit for Ted Lindsay and Glenn Hall in what he calls the “worst trade in the history of the National Hockey League.” Mr. Kennedy had three and a half productive seasons in Detroit.  But after an argument with the coach and manager, he was sent down to minor teams in Edmonton, Hershey and Spokane.

He eventually ended up back in Detroit, but he was traded almost immediately to Boston. It was a lot of moving around, but he didn’t mind.

“It was a good life playing hockey. You couldn’t ask for a better life with the education I had.  You got places you’d never get if you weren’t playing hockey.”

But he says he could never have done it without his wife, Marie, who died in 1988.

“We were married in 1956 when I was playing in Chicago. We had four kids, and my wife had to do all the work with the kids because I was on the road playing.”

Mr. Kennedy says he was a tough player in the league, but in “our day, you had to check and hit…. there was no high sticking. You got hit hard, and you got hit clean.”

After three years in Boston, Mr. Kennedy went to the Philadelphia Flyers and finally the Toronto Maple Leafs.

When his playing days finished, he started a coaching career that would take him everywhere from Halifax to North Carolina and Virginia to Newfoundland.

Eventually, he ended up back on the Island coaching junior hockey. He was glad to be back.

“To me, there was no place like P.E.I. There are lots of places I know I could go and get a job, but I want to stay here. This is home.

Mr. Kennedy has had quite a bit of success in Island junior hockey with his teams consistently finishing at or near the top of the league. He tries to teach his players to play as a team and to play “the simple” game.

“Coaches today are caught up in paper. I don’t need a sheet of paper to mark anything down to know what they’re doing wrong because I played the game. And I had a lot of good people coaching me.”

Mr. Kennedy says his players have to listen to him.

“It’s a bad place with me if they’re headstrong. Either they do it my way or the highway. I’m the easiest guy to get along with if you give me 100 percent and you want to listen. I don’t like guys that don’t care if you win or lose…If I get beaten, I’ll be the first one to shake hands, but I will not shake hands until you beat me…go out and give everything you’ve got to win the hockey game, but don’t line up to shake hands before the game gets going.”

Mr. Kennedy has been involved in numerous incidents over the years. For example, in 1990, as coach of the A & S Scrap Metal Abbies, his team won first place, but he missed two games after being suspended for an incident with the coach of the Sherwood-Parkdale Merchant Kings.

Mr. Kennedy agrees it all contributes to his reputation of icing rough teams. But he stresses there’s a difference between rough play and dirty play.

“I don’t believe in cross-checking, and I don’t believe in spearing. I believe in good hitting, and a good fight sometimes clears the air.  I don’t knock fighting.  You take fighting out of the game, then you’re really going to get the spear jobs and the chopping. It’ll be a bloodbath out there.”

He’d also like to see a little less emphasis put on the sport for younger kids.

“To me, hockey is still the greatest game, but I think they’re putting too much pressure on the kids today. We played maybe 14 games a year and saw the Forum once at the end of the year as young fellows. Now the kids are playing 80 games a year. It’s not fun for these kids anymore. It’s becoming a job for the kids.”

Forbes Kennedy’s career statistics can be found at http://www.hockeydb.com/ihdb/stats/pdisplay.php3?pid=2684.