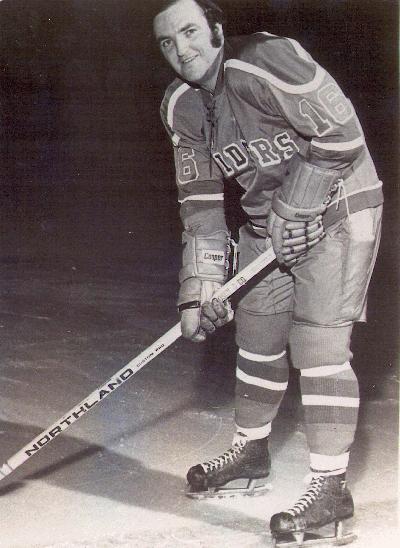 Jamie Kennedy is undeniably a reputable face in Island sport; having a career as a hockey player, coach, and official that spans over five decades. A jack of all trades, he has been a National Championship baseball umpire as well.

Born in Charlottetown in September, 1946, Jamie entered the hockey scene in 1967 when he participated in the Memorial Cup tournament with the Halifax Jr. Canadians.

His strong performance on the ice landed him his first professional hockey contract in 1968 with the Jersey Devils of the Eastern Hockey League. His performance was not one to disappoint, scoring 40 goals in his first season with the team followed by 49, 46, and 50 goal seasons. This feat crowned Kennedy the first Maritime born hockey player to score 50 goals in one season.

He finished third in EHL scoring and was named the League’s first team all-star right winger. In 1972, Jamie was selected in the Rebel League’s general player draft by the New York Raiders. On July 12 of the same year Kennedy signed a contract with the team and geared up for 54 games with the short lived Raiders hockey club. His career in the World Hockey Association ended after only part of one season due to the competition the Raiders faced with the New York Rangers. Both teams shared Madison Square Garden which proved to only be big enough for one team, and the Raiders got the short end of the stick.

Kennedy played his first 5 seasons of professional hockey with the Devils in the Eastern Hockey League. However, in 1973 the league folded and two new leagues were born; the North American Hockey League and the Southern Hockey League. Jamie played in each during his final three seasons of professional hockey. He proved to be a top contender in the NAHL’s hockey league, playing with the Syracuse Blazers. He was number one in the league with 13 goals in the post season, and was instrumental in helping the Blazers capture the Lockhart Cup as league champions. The 26 year old was second in team scoring, and was named a second team all-star.

His final two years of professional hockey were played with the 1974-75 Winston-Salem Polar Twins of the SHL where he managed to tally 59 goals and 132 points.

Jamie left professional hockey in the United States following the 1975-76 season and returned home to Prince Edward Island where he would wear the Charlottetown’s Senior hockey team jersey for many years. A born leader, Kennedy was a key player in leading the team to a Hardy Cup as Canadian Senior A champions in 1981.

During 1978, Kennedy began his coaching career. He lead the Charlottetown Juveniles to the league championships in 1978 and attended them once again with the Charlottetown Midgets the following year. He was named Coach of the Year for the Island league in 1979. He became head coach of the Charlottetown Islanders in 1983 and remained with them until 1984. During the 1985/86 season Jamie was named head coach and general manager of the Moncton Midland Hawks Junior A team winning the Callaghan Cup (Eastern Canadian Championship).

He made his way back to Charlottetown in 1986 where he would guide the Islanders to win the New Brunswick Senior A Hockey Championship, and again in the 1987/88 season.

From 1990-95 Jamie coached in the Island Senior Hockey League as well as obtaining his Level V of the Canadian Hockey Officiating Program. For over a decade he was one of the most sought after officials in the Maritimes.

He was highly successful, officiating many league championships at the University and Junior A levels.

In 1998 Jamie joined on as assistant coach of the Charlottetown Abbies winning the Eastern Canadian Championship (Fred Page Cup). Alongside his years of hockey experience, Jamie has represented P.E.I as a baseball umpire during the 2000 Canada Cup National Junior baseball championships in Stonewall, Manitoba.

With a successful career in hockey both as a player and a coach, Charlottetown native Jamie Kennedy is no doubt a deserving candidate to be inducted to the P.E.I Sports Hall of Fame.