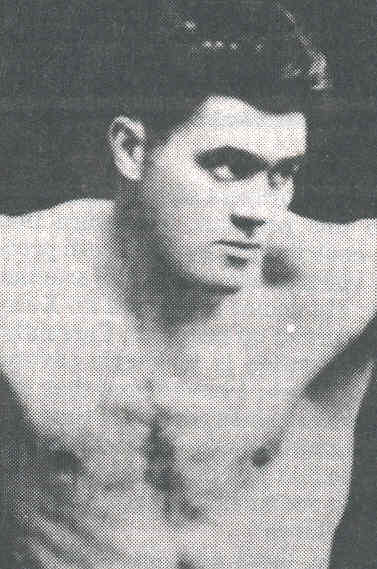 William “Wild Bert” Kenny was born in 1888.  He was the son of John and Margaret Kenny and was the most famous of their four professional boxer sons.  As a teenager, Kenny would leave the Peakes Station district to find soluble employment, first as a lumberjack in the Maine woods, and finally as a steelworker in the towering canyons of New York City.

Like so many rawboned young emigres awash in the big cities of the Eastern seaboard, Bert Kenny would begin his professional boxing career in 1908 out of Billy Gibson’s legendary Fairmount Club, with Charley Rose acting as both his coach and manager. The moniker “Wild Bert” came first to the young slugger because, as one scribe noted, in boxing’s golden era, one boxer above all others electrified ringside audiences with his whirlwind fighting style: “He gave you goose pimples, from head to toe once the bell rang, because he was like an infuriated panther, brought on from jungle land   His name was Bert Kenny, he was Irish, and that this Bert Kenny might be distinguished from any Bert Kenny, living or dead, they called him ‘Wild Bert’ Kenny!”

Over the next two decades, “Wild Bert” would fight an estimated 100 bouts, winning the majority. The Island-born boxer would be a headline draw on both sides of the Atlantic. Among the many international titleholders which Kenny battled are the European heavyweight champions, Erminio Spalla, and Irish light-heavyweight champ, John “Jack Runner” Reddick.  Among his other formidable ring opponents are the veritable Boxing Who’s Who of Joe Jeannette, Billy Miske, Jeff Clarke, “Panama Joe” Gans, Tommy Gibbons, Johnny Risko and the former world light-heavy champion, “Battling” Levinsky.

But the boxing match for which “Wild Bert” Kenny will best be remembered is his July 8, 1916, ring war with the great Jack Dempsey, who would reign as heavyweight champion of the world from 1919 to 1926.  Although a natural middleweight and light-heavyweight who ranged from 158 to 178 pounds, “Wild Bert” was a logical match for the powerfully-built Dempsey, the sport’s first boxer to fight in a million-dollar gate.  As Jack Dempsey would recall in his autobiography, “Kenny and I earned our money that night at Gibson’s.  I dropped him in the second.  He bounced me off the floor a couple of times in the third.  By then we had learned each other’s strong points and weaknesses, and for the next seven rounds I fought one of the most brutal fights of my life … I could have sold the blood for fourteen dollars.”

This ten-round draw with Dempsey remained the pivotal fight in Kenny’s career, and the Island boxer regretted to his dying day that he didn’t get a rematch with the future world champion.  Few of boxing’s historians would deny “Wild Bert” such a rendezvous with destiny, for he had entered the ring that day with a broken hand.

For several years, a poster from this amazing 1916 boxing match was displayed at Pat’s Rose and Grey, that eminent Charlottetown eatery, owned and operated by some of the distinguished Kenny clan.  The poster has mysteriously been lost in the meantime, with its inch-high boldface announcing the Kenny-Dempsey donnybrook.  It will be a grand day when that poster is safely displayed in this province’s sport shrine, the P.E.I. Sports Hall of Fame.  But until that day, it is enough to recall the young man who journeyed to the Boston States so long ago, and had heart enough for ten men.