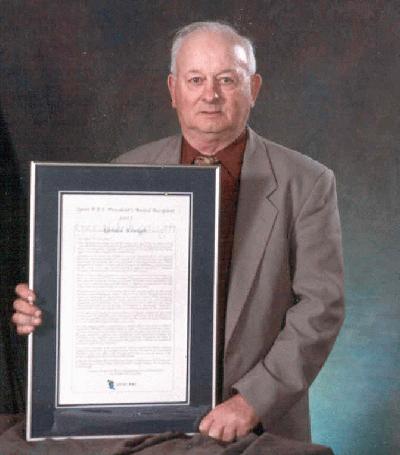 Often referred to as ” Mr. Everything” it was Gerald Keough’s vision and efforts that built the minor sports system that exists in the community of Tignish.

Growing up in the 1940’s and 1950’s in Tignish Keough did not have the opportunity to participate in sports as a youth. However, he developed an early passion for sports serving as bat boy for the community’s senior baseball team, the Tignish Aces.

Keough began the construction of a baseball field adjacent to the school where he established a four team minor ball program in the summer of ‘59. Uniform money did not exist in those days so the parents joined together to make uniforms out of old flour bags with coloured strips sewn on to distinguish each team.

Under the guidance of Hall of Fame inductee Dr. David Boswell, Gerald Keough led the establishment of the Tignish Sport and Recreation Commission in the fall of 1959. The Commission decided that the construction of a community arena would be a priority. While serving as a volunteer managing- director , Keough would oversee a six year fundraising campaign for the facility. With no financial support from government the Tignish Arena was completed in 1966.

Keough was hired as the first rink manager in 1966 and soon established the first minor hockey and figure skating programs in the community. In 1970 he assumed the additional responsibility of recreation director, a position he held until 1985. He is also credited with having established the Tignish Boys and Girls Club and the community’s Red Cross Water Safety Program.

Gerald Keough has numerous other credits as a coach, manager, official, and administrator. He has been recognized provincially and has been awarded the Canadian Amateur Hockey Association Outstanding Volunteer Award. His volunteer efforts extend well beyond the realm of sports, earning him the Citizen of the Year Award in 1986, and the RBC Hockey Leader’s Adward in 2005. In 2001 he was also presented with the prestigious Sport PEI President’s Award, emblematic of outstanding contribution (pictured with this award), as well as the Senate of Canada Volunteer medal.

A true sporting pioneer, Gerald Keough’s outstanding commitment to his community and to Island sport has earned him well deserved induction into the Prince Edward Island Sports Hall of Fame and Museum.