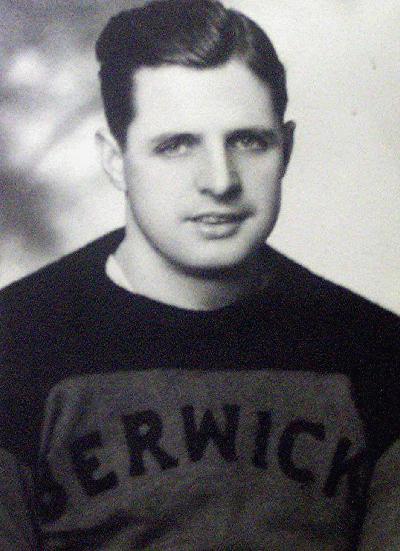 The only Maritimer to both star in the famous Big Four Hockey League and go on to become President of the Maritime Amateur Hockey Association was Walter Lawlor.  Born in Charlottetown in August of 1912, he was probably the best known Islander connected with the game of hockey.  As a young man, he performed with the famous Charlottetown Abbies of the early 30s, when the team was part of first the “Big Six,” then the “Big Four” League.  He was the 3rd member of the talented Island line of Johnny Squarebriggs [inducted 2005] and Ivan “Hickey” Nicholson [inducted 1976].

Walter was one of very few Island natives to play with the Abbie Team in the “Big Four,” and after its demise, he played one year with Baltimore of the American Hockey League before taking on the job of playing coach for the Berwick Bruins of the Nova Scotia Hockey League.

An excellent stick-handler and master of the poke-check, Walter Lawlor almost single-handedly led Berwick to the Nova Scotia Senior Championship in 1937, an amazing achievement for the small town team from the Annapolis Valley.  Reports in the Halifax Herald hailed Walter as the greatest playmaker of his day.

Walter Lawlor returned to his native Charlottetown in 1940 and assembled the famed Junior Royals.  He led his team to three Maritime Junior Crowns, as well as two Canadian Junior Finals, where they lost in close battles with Perth, Ontario in 1940 and 1941.

Following his coaching days, he took to officiating.  His fair and honest style made him a well-respected referee, popular with all teams, and, as a result, often in high demand.

Walter Lawlor served as an officer of the M.A.H.A. from 1943 to 1953, rising to the Presidency from 1951 to 1953.  Thus, this mild-mannered, modest but brilliant player attained all goals possible for someone involved in Maritime hockey in that era, having been involved in every aspect of the game at some point in his career.  Few, if any, will follow in his footsteps.

In later years, Walter continued his hockey involvement. He volunteered as a coach with the Charlottetown Minor Hockey Association, and often played hockey in the “Oldtimers” League.

Walter Lawlor passed away on May 1, 1968.  The Prince Edward Island Sports Hall of Fame was pleased to honour the memory of this gentleman of Maritime ice lanes of the 1930s by inducting him into the Hall on July 16, 1978.