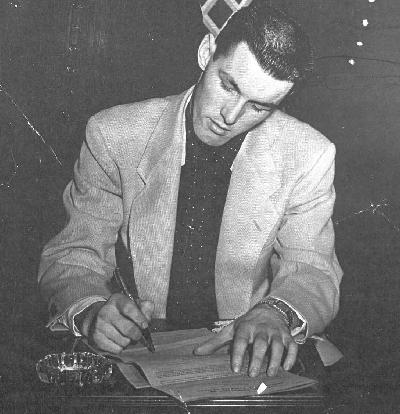 At seventeen, at the height of baseball’s golden era in the Maritimes, he would become the first ball player born and developed on Prince Edward Island to sign a professional contract with a major-league team, the Brooklyn Dodgers. Brian Lewis’ genius as an athlete, and later as a coach, would derive from a love of sport that few men will know.

” It was a marvelous time, ” he observes, “”I had thrills everyday, and putting on the uniform is still a thrill to me if I’m coaching. Going to see Joe Bernard, Charley Ryan, Tarky and Buck Whitlock at the ballpark, or listening
on the radio to Tic Williams play hockey, they were my idols as a boy; and within two or three years I’m playing with them. They were great times. Maybe I should’ve kept going to school, but I wouldn’t trade it for anything.” Such words are the hall of  famer’s credo.

Born in Alberton, on March 22, 1933, Percy Brian Lewis’ childhood was unusual in that he knew little and enjoyed less of sport. Only starting to skate when he was eleven, finding an old pair of ladies Automobile skates in the attic, and stuffing them on over his shoes, he and chum Rusty Callaghan walked across the street to a frozen brook.  “They’d stick me in nets and I didn’t even know what the goal was.” Although there was no organized baseball in Alberton during the war, as a boy he was thrown in at third base with a group of men, where he caught a rocket hit to him with his bare hands. “They all cheered me, and so I wanted to play ball, and I loved it.” A local farmer, Claude O’Meara, always gave the boys of summer a hayfield to play in, while his sister Shirley in Halifax sent home a five dollar glove, and the story of Brian Lewis, ballplayer, begins.

Moving a few years later to Charlottetown with his family, Brian at fifteen organized his own North End teams, utilizing 18 and 20-year olds not quite good enough to make the junior squads. On one memorable junket to Summerside, piled in the back of Big Jim Pendergast’s old army truck, Brian’s team edged the Summersider’s 6-5, and they were pelted with rocks by the locals, not an uncommon occurrence in those times. That same year, cracking the Juniors’ line-up, 15-year old Brian Lewis would meet his lifelong baseball mentor, team coach Ev McNeil, a local postman originally from Boston, the most brilliant analyst of the mechanics of the game of ball ever to grace the Island.

“He’s one man I love,”  reflects Lewis , and the McNeil  philosophy of  truthfulness at all costs became his own. “What you’re going to get out of baseball, no matter how far you’re going in it, when it’s all over, is some great friendships.”” And this from a man who could go all over a ball game, batter by batter and pitch by pitch, was the greatest lesson that young Lewis would learn from Ev McNeil.

The next year McNeil considered Brian good enough to play for the Senior Abbies, yet when he and another youngster starred in a game against Moncton Legionnaires, the older Abbies’ players were in open revolt, refusing to play under coach McNeil, resenting the possibility of losing their jobs to the boys. McNeil resigned, and Lewis would never again play with the senior squad, although he made all-star centerfield the following year for both junior and senior teams. A dazzling fielder, Lewis by age twenty would add a fearsome bat to his arsenal. At 20, Brian joined the Maritime Central Airways to work and play baseball with the MCA-sponsored team, finalists at the 1953 Maritime senior championship. Next stop would be Summerside’s Curran and Briggs Juniors, Island champions coached by Johnny Carroll of Natick, Mass, the well-respected Dodgers and Braves scout and Cope Cod League coach, who asked for Lewis’ help against Lewisville New Brunswick, in that same year’s Maritime Junior Championship, Lewis would respond with a torrid .500 series at bat percentage.

Scouted by both Cleveland Indians and the Dodgers, Brian Lewis would sign the first modern day professional baseball contract by an Islander that year, 1953, arranged by Brooklyn’s Bill O’Connor. Brian’s father, John Calvin Lewis, a fearless and outspoken editorial writer with the old Charlottetown Patriot, would himself ironically receive a letter of congratulations from the Dodgers’ Jackie Robinson, for the elder Lewis’ diatribe against an incident of racism at an Island hotel.

Invited to the Dodger training camp at Vero Beach, Brian Lewis was beset by a leg infection “like a big worm” which hampered his performance, and yet he was too proud to wear the white stockings which indicated personal injury. Meanwhile, unscrupulous camp officials cheated him out of a few American dollars. Brian was still hitting the ball well, but he wasn’t fielding, and Lewis’ great jump on the ball and terrific range were the big reasons he had originally been signed by the Dodgers. Brian’s Double and triple A dorm mates at Vero Beach would fall asleep talking to him, so keen was his desire to learn. And yet he felt disheartened at the turn of events. He had gotten word that he’d made the club, that the Dodgers had plans to turn him into second baseman, because of his lack of arm strength, and yet he recalls, “it was a down time for me. I didn’t want to be there, and so they did let me go.”

Brian Lewis’ abilities as a natural athlete were not confined to baseball. Selected by Hockey Hall of Famer Marty Barry to play for Halifax St. Mary’s, a virtual Maritime junior all-star squad, Brian boarded with his beloved second family, the McCluskeys, in Dartmouth. Only154 pounds, Lewis decided to earn a few extra dollars by playing for Nick Nicolle’s Saint John Beavers, in the tough Maritime Hockey League.  After that he would catch on to the Trenton Scotias in the rugged APC league, stomping grounds of the mighty Tic Williams, before his Dodgers’ contract forced him to quit hockey the Christmas of 1953. In the later years, Brian would play ten games
with the Charlottetown Islanders of the Maritime Major League, despite skating on torn ligaments. And he would serve as an Island referee-in-chief for eight of the eleven years he officiated, getting regularly booed by hometown fans because he was not a homer. But that was the Brian Lewis way, to call it like it is, whatever the cost.

Universally respected by everyone from the little leaguers at Victoria Park to the legendary Hall of Famer Ted Williams as a man who knows ball, Brian Lewis today devotes his time to the young players with stars in their eyes. “I can remember every adult who was good to me, and every one who was not,” observes Lewis today. “So when I see a kid, I say hello, ask him how he is. And that kid will say, ‘Maybe there’s a good world out there.’ Gee, kids, I love them.” Passion for the physical life, whether it’s coaching a peewee or a little league team, or mastering the intricacies of fly-tying and fly-fishing, is the legacy of this Island sportsman. The Prince Edward
Sports Hall of Fame welcomes Brian Lewis to its ranks as a most worthy inductee. 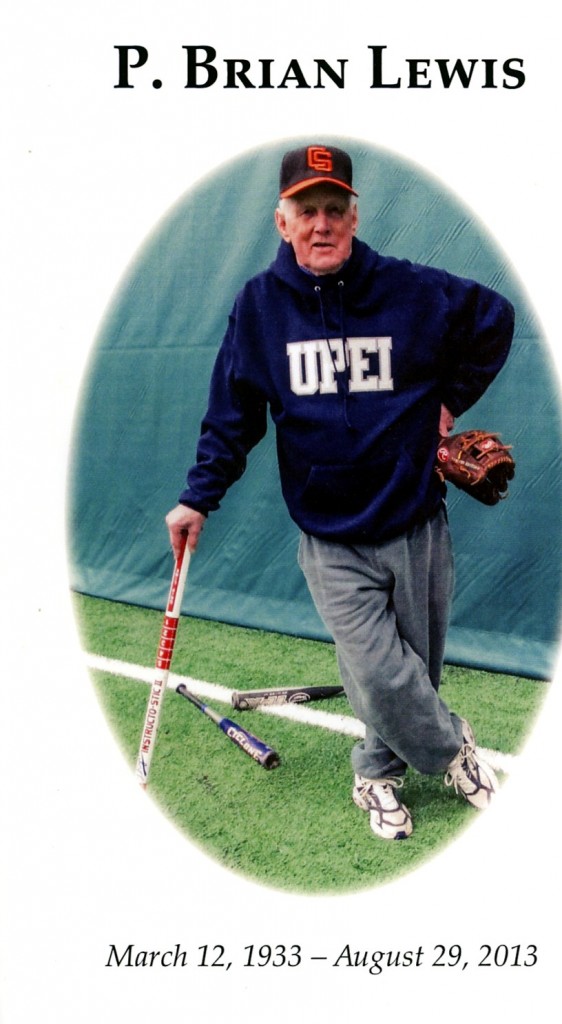